This was a trip Emily and I took on a whim, when a friend who was working in Tuscon invited us to come to Cochise for a long weekend to celebrate the Beanfest celebration. We booked a cheap flight from LA and rented a car (they gave us a Charger!) and drove over towards Cochise Stronghold. I really didn't know where the group was going to be, so we just drove to where Google Maps said Cochise was located, driving fast like people normally do in Arizona. When we got to the trailhead which is the primary launching point for climbers into Cochise, we could not find the group, and our friend didn't have service to talk. After trying a few different rough roads that the charger could barely make, we ran into a small group who informed us we were on the wrong side of the mountain!

Already exhausted from a long day at work, and flying/driving, we decided just to camp there, and meet the group in the morning. We popped up the tent and went to sleep. It was a beautiful, calm night with an amazing display of stars. As soon as twilight hit we were up and made the hour long drive to the other side of the mountain, where we ran into the group, and caught them before they left for some climbing. We joined four other guys and went to climb Moby Dick, a 6 pitch 5.8 with excellent climbing. The approach was a little long, and involved hiking up the valley for a couple miles, then up a steep brushy slope to the base of the route. One friend fell behind on the approach, but ended up meeting up with us as we all waited at the base for a party above us to clear the first pitch.

Emily and I let the other guys go first, and I studied the route. The first pitch consisted of an awesome flaring crack with sections of face climbing. I thought it was the hardest pitch on the route. Since each team in our group had 3 people, we had double ropes. Emily and Alicia followed up and I started the second pitch, which was more of a slab pitch without much pro at all, but easy enough I only needed a couple pieces. The third pitch was a tricky slab utilizing a left facing corner flaring crack for pro. When the rope was running out, I had to use large chicken heads as my anchor! The 4th-6th pitches consisted of mostly face climbing with an occasional crack for pro but never exceeded more than 5.7 in difficulty. We reached the top around 5pm I believe, and Emily was so thrilled since this was her first multi-pitch climb! She did an awesome job and really enjoyed it.

There was one free hanging rappel off the backside of the summit on a double bolt anchor, and this was also Emily's first rappel! I coaxed her into it, although I think she was a little terrified lol. I gave her a fireman's belay at the bottom just to be safe though. Once we all made it down, we scrambled down the brushy gully and hiked back to the car and back to camp, which we reached a little after dark. Then the party began :)

There was a large campfire, tons of food (mostly beans), and games that lasted well into the night. Emily and I may have had a little too much to drink and by 1:30am went back to the tent. The next morning, we went to a single pitch wall right next to camp and did a few bolted routes before deciding to call it a day and head back to Tuscon. We went back to this incredible burrito place with Alicia, and caught our flight back to LA. 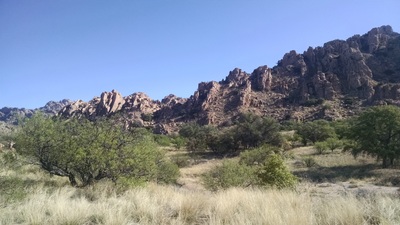 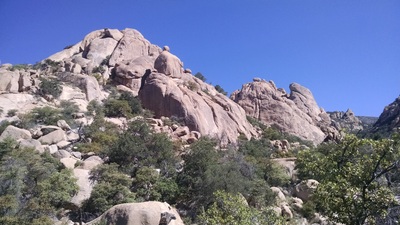 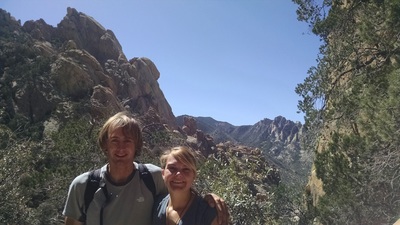 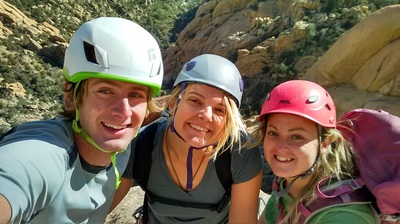 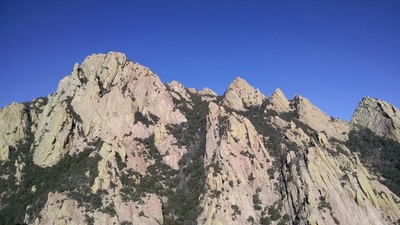 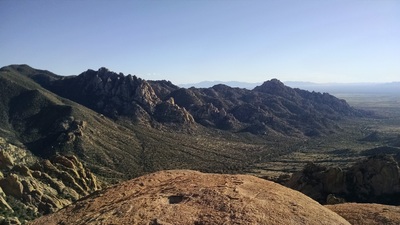 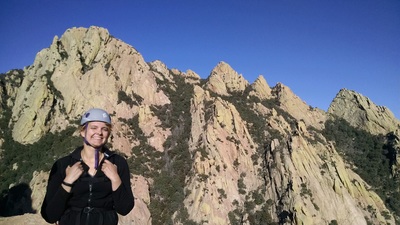 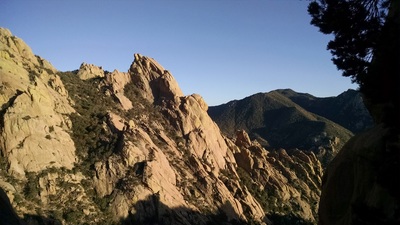 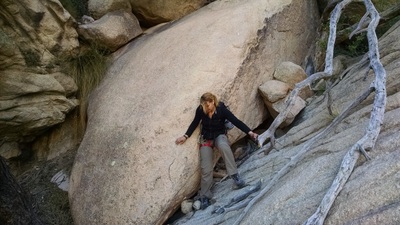 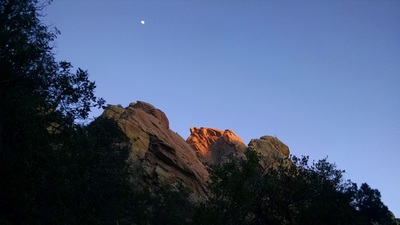 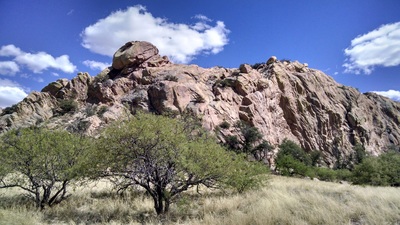