Josh and I made a daytrip to summit both of the Klondike Bluffs in the northwestern part of Arches National Park. From Grand Junction, it was a fairly short drive to the Tower Arch Trailhead. It is easy to access this trailhead from the northwest, entering the park on the Salt Valley Road without having to drive all the way south to the main park enterance (and waiting in the dumb line). We got to the trailhead with just a few others cars there despite a warm Saturday morning and wasted no time starting up the popular trail towards Tower Arch Trail. We cut right off the trail as it began ascending the hill a couple minutes from the parking area. The Klondike Bluffs are a pair of summits just west of the trailhead that rise just over 500 feet. There is an east and a west summit with many smaller towers between them, both of which being about the same elevation separated by only 150 yards and neither of them can be reached easily. Both summits have some low 5th class climbing to reach their summits, meaning very few people have stoff atop the Klondike Bluffs. Most people who do climb these rock towers summit them both.

Josh and I scrambled up the north side of the bluffs following the path of least resistence through the lower cliffs until we were within what seemed like spitting distance of each summit. The key to the approach is to locate a narrow ledge allowing passage along a very steep and overhanging cliff to avoid excessive elevation loss to reach a large drainage coming off the north side of the bluffs. Once in this drainage across the ledge, walk up the drainage towards the ridge. To start we scrambled right to a large flat mesa immediately below the west summit and made the final walk to its base. A single pitch of climbing, only about 30 feet in height was necessary to reach the top, which is climbed via one of two options on the east side of the west summit. When looking at the east side from the flat area, the left (south) side features a 5.9 flaring chimney/crack that can be used to climb the 30 feet to the summit. However, the more popular route is on the right (north) side where a very wide chimney can be climbed for 15 feet or so to a cave with an hourglass looking appearance from a distance. Once in this cave, there are two options. First option (which is typically the standard route people use) is to climb the hardest 5.4 slab in the world to the left without pro as it heads up to the left of the hpurglass pillar just above the cave. I did not like the look of this and without any pro didn't want to risk falling so I chose to climb right on the outside of the hourglass shaped rock (yellow line in the image below). Worming my way up and right out of the cave, I traversed horizontally on a narrow ledge over to the north side of the west summit, walking/crawling about 50 feet before climbing the final 15-20 feet of easier slab to the top of the hourglass rock above the cave. An easy jump from this rock across the crack allowed access to the true summit. This was easier climbing and I was comfortable doing this traverse and wraparound onto the north side without pro. 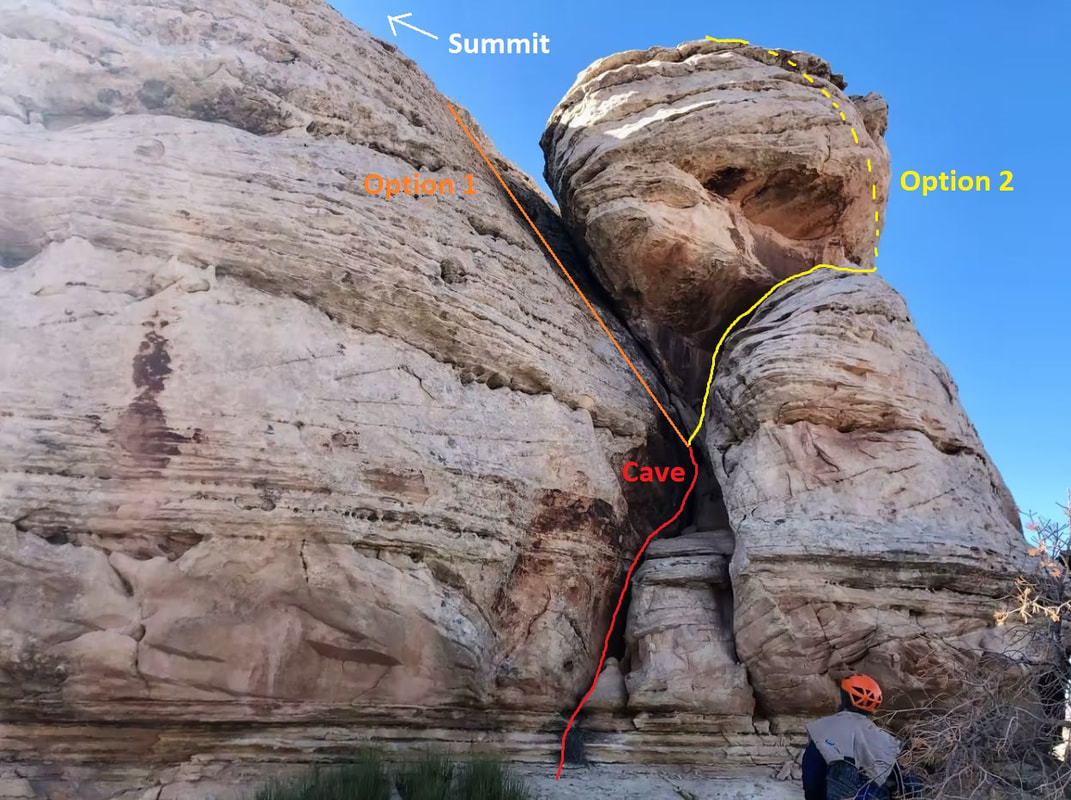 Route options up the east side of the west summit of Klondike Bluffs with the hourglass feature plainly visible. Photo by Liba.
I belayed Josh up, due to the winding nature of the second option, the 30 foot height of the pitch utilized at least 60 feet of rope length! A small but stout bush right at the summit had some webbing around it offered a good rappel anchor to descend from the west summit. Looking east to the east summit a short distance away we were not able to determine which was higher so after making the single rappel we descended slightly back north and traversed below a handful of smaller towers and reached an ascending rightward loose gully. We scrambled up this gully/chimney which led to a notch directly below the east summit. The view from this notch has incredible views down to the east with the parking lot visible. Directly up from the notch is a near vertical chimney about 25 feet tall that offers the only 5th class climbing. This was easier than the west summit though and I felt comfortable soloing it, with the crux being at the top where a chockstone had to be climbed around to surmount the top of the chimney. A short but exposed scramble led from here to the tiny summit of the east peak. 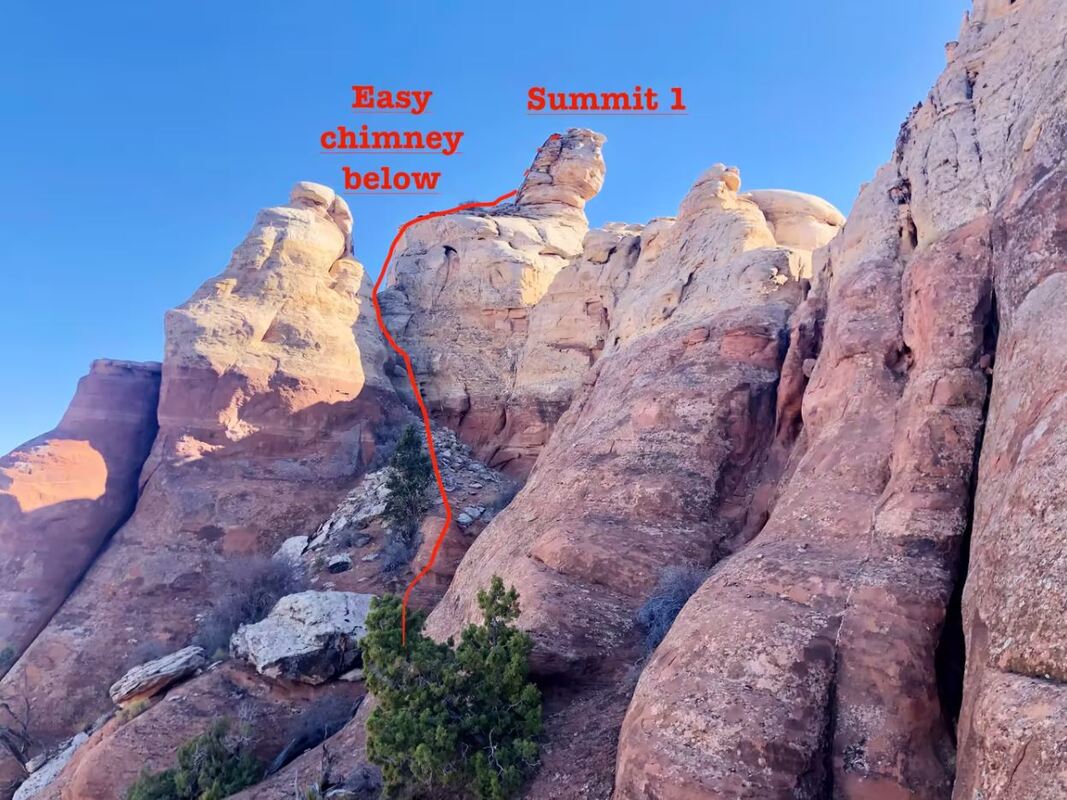 Route up the east peak following the chimney to the notch viewed from just below the north side of the serrated ridge. Photo by Liba.
After enjoying the views as the winds died down later in the morning, the sun finally started to come out. We wanted to also do a second hike in the afternoon so we made the short walk back down to the trailhead and by noon we were driving along the roads to the Delicate Arch Trailhead so Josh could see this landmark feature. Unfortunately most of my own photos from this hike I seem to have lost. 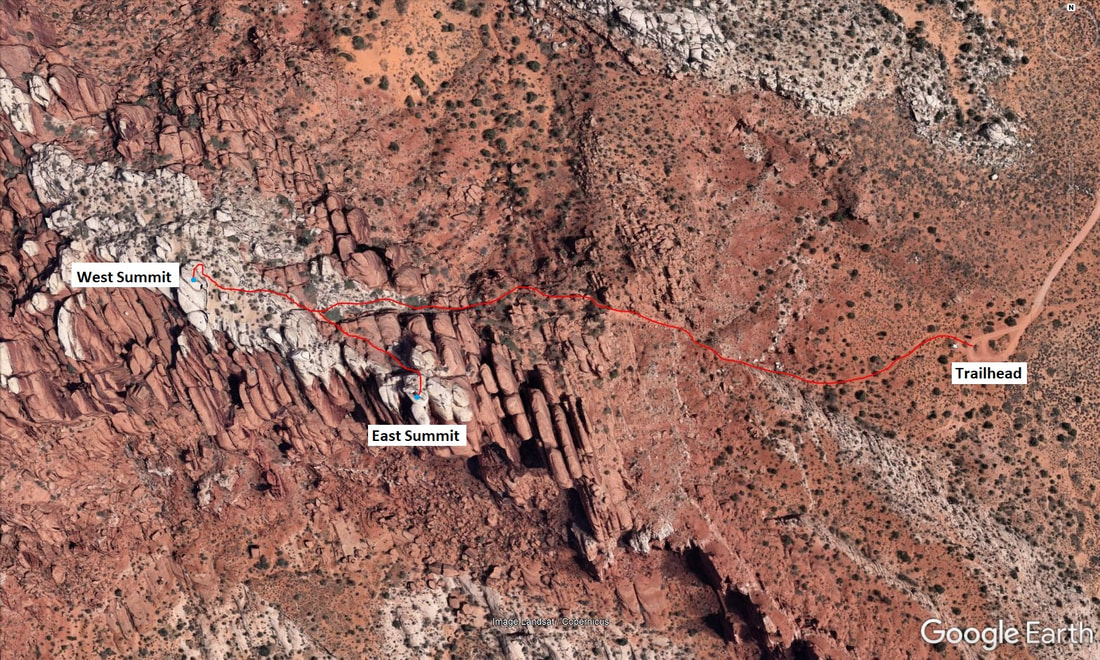 Overview aerial map of the Klondike Bluffs and route up to each peak.