I wanted to start my hiking season in Colorado last summer with a bang so I headed for one of my favorite places in Colorado, the Northern Sawatch Range. The plan was to climb Gold Dust on Saturday and Notch Mountain the next day on Sunday. We drove to the Fulford Caves Trailhead for Lake Charles and slept the night in the bed of the truck.

With an alpine (about 4am) start we headed up the Lake Charles Trail in total darkness. After a few breaks to check the map we soon saw the early twilight and started veering left, or east off the trail and climbed up through the forest until we reached one of the most beautiful places I've ever seen. It was a basin called Negro Basin at the base of Gold Dust and Pika Peaks. As the twilight got brighter I was in heaven taking photos and enjoying the scenery of the calmest little ponds and perfect green alpine tundra. Our goal lie right above us across the valley and it was at the mercy of my camera as I was witnessing one of the best sunrises I've ever seen.


Knowing there were going to be thunderstorms developing that day we quit dilly-dallying and started climbing. We crossed the valley and headed up the south slopes of Gold Dust Peak. This was a class 2 ascent and it was pretty steep. Upon gaining the west ridge we had an easy ridge walk to the summit. If I recall correctly we were at the top a little after 8 in the morning. The sun was still low and made for some great summit views.

To our south we saw Pika Peak and the beautiful ridge that connects it with Gold Dust. To the north we Saw New York Lake and Peak. To the west lied the hills above Glenwood Springs and to the east...well lay the bright sun and Mt. Jackson which I was to climb later that next month.

To my amazement, looking at the summit registrar we were the first to summit Gold Dust in well over a month. We had went up August 26th and the previous entry was in early July. Boy do I love thirteeners.

Our descent was hard on the knees but by the time we made it back into Negro Basin the sun had risen enough to light the landscape directly.

I shot more photos from inside the basin as the clouds slowly rolled in.

After enough clouds rolled in to diffuse the sun we started down and back to the trail. Once we hit the trail we headed up the last half mile to Lake Charles for a lunch break.

From here we ran the 5.5 miles of trail back to the truck. We were lucky it never rained on us! We did see many people heading up the trail to stay the night at Lake Charles. As always I stopped to talk to every person I saw to brag about where we went. No one I saw had even heard of Gold Dust and we saw no one up in Negro Basin.

I'd hope to return here someday.

We drove back to Eagle and were on our way to the Halfmoon Trailhead. When we got there the parking area was packed. We saw many people coming to and from Holy Cross. Since there was an active thunderstorm going on at the time we just sat in the lot and watched the storm from the truck. That night we slept right there.

Woke early (3am) and started up the Halfmoon Trail towards Holy Cross. No one else was up as early as we were. We hit the trail junction to Notch Mountain rather quickly and broke off to the left. We continued climbing Notch Mountain in the dark. The only lights we saw were the cars on Highway 24 way below us.

And like clockwork we arrived at the summit 20 minutes before sunrise. It was very cold and I was wishing I brought my gloves. I forgot how cold it can get in the Rockies even in August!

We sat and watched the sunrise on Holy Cross from atop Notch Mountain across the Bowl of Tears.

After eating we started heading for the infamous notch. It is a class 3 traverse around it to the south summit. We had to go around the west side and the whole traverse was shaded and cold and without gloves we had to be careful to retain a strong grip as there were some exposed areas.

Once we finally crossed, it was a quick climb to Notch's south summit where we saw the surprisingly well built shelter. It was made of solid concrete and large cinder blocks with a door that will keep a moose out!

The sun was rising and warming things up nicely. When we got to the shelter and went in to take a quick break we saw a large group of people inside and woke them all up....oops!!

From here we wanted to traverse completely around the Halo Ridge and summit Holy Cross from the south and use the trail to get back to the car but my friend was getting altitude sickness since he had recently moved to CO from Texas.

So he started down the switchbacking trail towards Lake Constantine while I headed for the unnamed peak just south of Notch.

I continued a little further and descended to the low point on the Halo Ridge before turning back. since I had no clear view to the west and I saw clouds forming I didn't want to risk getting stuck on Holy Cross in a storm. I got back to the shelter and started down the switchbacks.

When I got back into the trees I saw a few more people who I talked to all the way back to the trail-head. I though about going to the Tuhare Lakes but I'm going there this summer...plus I still had to get back to Golden in a reasonable hour to do the homework I had assigned to me the first week of classes....how awful!

A great weekend in the mountains though. 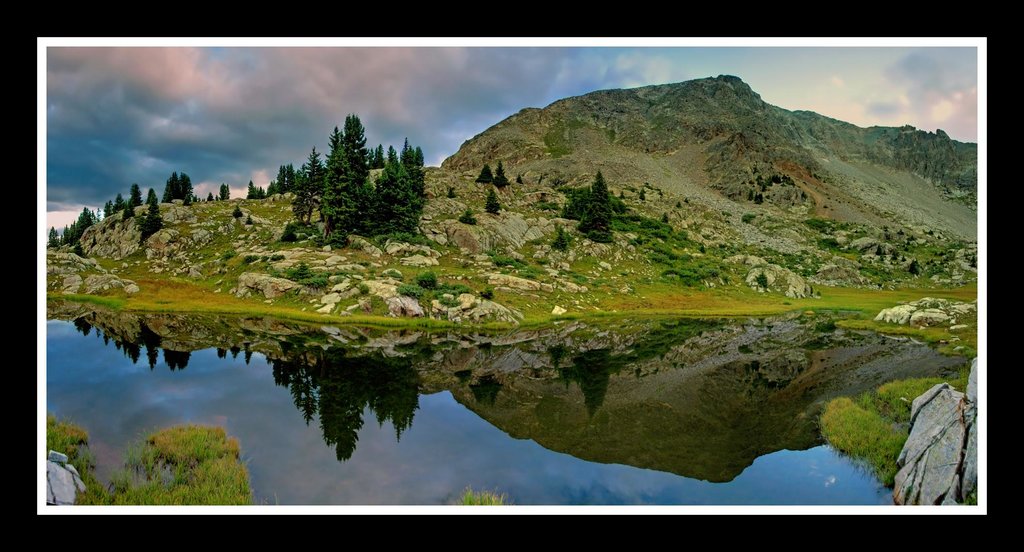