This trip, in essence changed my life. I was just starting my senior year in high school and although I had done day hikes and camping trips before with the Boy Scout Troop I was involved most with, I had never done an actual backpacking trip, nor had I reached the top of any real mountains. Just before my final year in High School I switched troops from the one I was with in Renton (which was disappearing), to one in Issaquah which was much more active in monthly trips, and had a much larger group of people. Even the parents were very involved and I knew I would be able to finish my Eagle Scout project now. That was the primary reason I switched, but the opportunity to get more involved with trips that were more than just car camping appealed to me as well.

My first trip with the new Issaquah based troop was a 3 day backpacking trip to Spectacle Lake in the Alpine Lakes Wilderness with older scouts going to make an attempt of Chikamin Peak. I remember all the classic beginner mistakes I made like wearing a cotton T-shirt, carrying a blow up air mattress and an inadequate, Wal-Mart tent. Nonetheless, this trip was the start of a new way of life for me, and I will never forget the adventure, and what I learned during those 3 days.

It started when we all met in Issaquah and drove to the Pete Lake Trailhead, just beyond Salmon la Sac if I remember correctly near Cle Elum. We probably had about 20 people in total, but the younger guys would only hike to Pete Lake and camp there for a couple nights. With the guidance of two experienced adults, 7 of us continued to Spectacle Lake along the Pacific Crest Trail. I remember specifically falling and getting soaked while crossing Lemah Creek but the hike in was a very sunny and nice day so I dried fairly quickly. Once we reached the lake I was mesmerized at the beauty of both the lake and the surrounding mountains. I had never seen anything like this before and instantly fell in love with it!

We made camp on the cool peninsula that juts out into the lake and enjoyed a very calm night. At the time, I didn't think climbing the peaks towering above the lake (like Lemah Mountain, Chimney Rock) had ever been done and on top of that, I couldn't imagine how it was even possible. Little did I know I was about to learn more about mountains than I could have imagined, and open up a passion I hadn't ever discovered in life before. At a young age of 17, the direction, and mindset of my life changed dramatically.

The next morning, we woke up and had an early breakfast, then began hiking around the south side of Spectacle Lake until we reached the inlet stream coming down from Glacier Lake. We followed that stream up, past a waterfall and through trees until we reached a massive boulder-field. It took us awhile to hop across the car sized rocks but on the other side was a view even more grand than Spectacle Lake! The deep blue waters of Glacier Lake took my breath away even more, and a crisp, fall breeze reminded us it was October. The sun was out and there wasn't a cloud in the sky.

From Glacier Lake, I really couldn't describe in detail exactly where we went because I was mindlessly following Barton, who was leading the way. All I know is we went up the east side of Chikamin Peak. Although I was a complete newbie at even off-trail travel and scrambling, the years of swimming I had been doing provided me more than enough endurance to still be the fastest person in the group. I think I remember annoying Barton because he kept telling me to slow down and stay behind him lol. A few small clouds were passing by and we eventually reached the summit block, a little over 2,000 feet above Glacier Lake. By this point it was just Barton, his son, me and one other guy whose name escapes me. The other 3 decided to wait about 1,000 feet below the summit.

Barton continued on for 15 minutes or so looking for the safest way to climb the 25 foot summit block, while the rest of us waited. He found a fairly easy scramble route and one by one we reached the top. It was the first scrambling I had ever done and I loved it! Once on the summit, I recall seeing Pete Lake way below us, and realized how far we had come. The wind was picking up and clouds were building to the west. At the time I didn't know what that meant but I certainly learned the next day!

We retraced our steps back down to Glacier Lake and Barton located a small trail that continued south and met up with the PCT just above Park Lakes. We then took the longer, switchbacking trail back to Spectacle Lake to avoid scrambling down the creek in the dark since it was getting late. We reached camp right at nightfall and stayed up late to watch the stars, and reflect on the climb.

The next morning it was cloudy, and Barton rushed us to break camp and get ready to start hiking out. It wasn't raining when we left the lake, but about a mile down the trail it started, and never stopped. I got wet once again crossing Lemah Creek but this time around I didn't care since I was already soaking wet from the rain. The 5 mile hike out past Pete Lake and to the parking lot was miserable, but amazingly I don't ever remember complaining. I could only think of the fun I had the day before. We reached the parking lot and quickly started off to the post hike McDonalds tradition.

It is February, 2015 as I write this. I never got around to it when I started my website in 2012, and unfortunately, I didn't even have a camera at the time which is something I couldn't fathom now. So many things about this trip happened that I no longer experience. Now that I have been climbing for well over 4 years, I don't see mountains the same way I did back in 2007 and 2008. The intense excitement of experiencing a region for the first time is harder to come by and the mindset of just pure awe has never been replicated quite like it was on this trip. Perhaps the closest I have come to replicating the feeling I had on Chikamin Peak was when I went to Chile and Peru last year, and maybe the summit of Pico de Orizaba in Mexico. Part of me wishes I could feel like that after every climb I do but the reality of it is that once you do something for a while, your mindset about it changes.

I still absolutely love the mountains and venture into them very often. I probably always will, however I see them differently now. Not that it's now any better or worse it's just different. I am very knowledgeable about many things regarding mountains from weather, route-finding, efficiency with your energy, gear, and technical climbing methods. I also now have a good grasp on managing risk and am always working to improve my climbing ability. At the time of this trip, none of those things were even on my mind and that's why I think it was so special. I had no idea what I was doing, so my mind had the ability to wonder, and enjoy the beauty that surrounded me to its fullest extent. Plus, I didn't get any photos which, when looking back on it may be a blessing because only I will truly remember how special this trip was and the images from this trip are forever burned into my mind. I am sure Barton may have some photos somewhere and I may ask him for them one day, but for now, if you have never been to Spectacle Lake or Chikamin Peak you'll have to use your imagination as to what it looks like :) 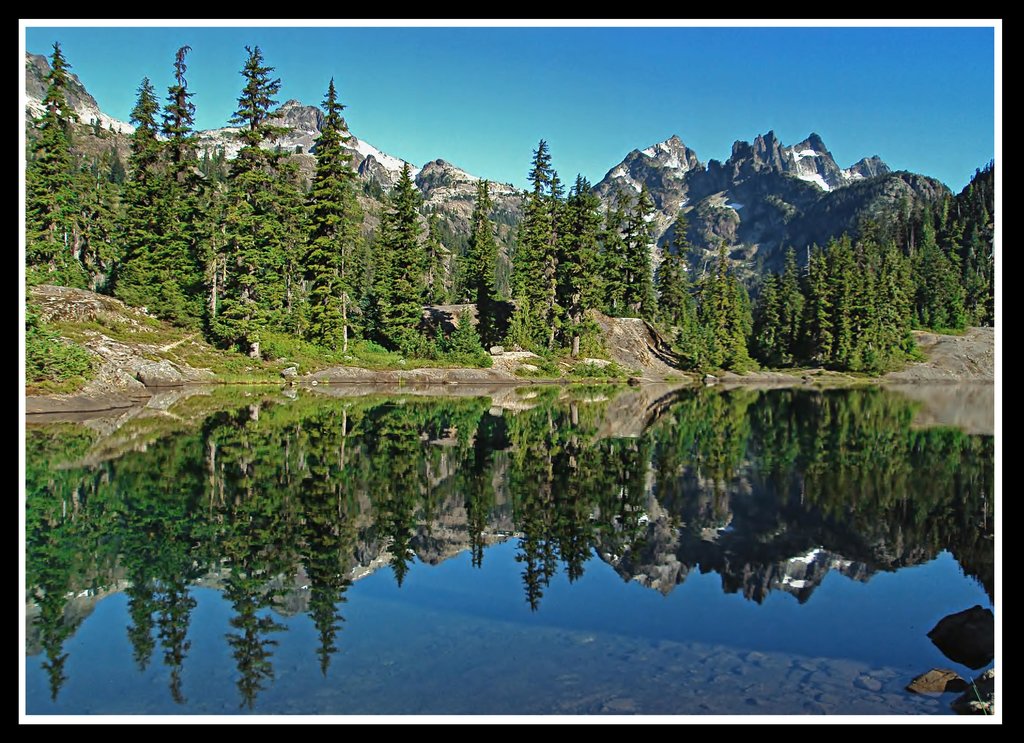