It was a cold weekend in January and Scott had contacted me about a trip to the Moab area. Since I had done a bit of ice climbing, I agreed and looked forward to a nice trip back to the desert. On my way over from Ouray (I was climbing at the ice park for a couple days) I picked up a vagabond in Ridgeway who was trying to get to Durango, but due to the closure of Red Mountain Pass for road work he was stuck. So I offered to give him a ride to Moab. He was happy to go and we drove to Moab. I actually also bought him dinner at Denny's and a night stay at the Lazy Lizard Hostel.

The next morning I dropped him off back at the Denny's where he could try to get a ride somewhere else and I met Scott and his family at the Super 8. I carpooled with them as we drove into Arches National Park. The plan for the day was to climb Elephant Butte and if time allowed, either Owl Rock or Bullwinkle Tower. We parked at the small pull-out just before The Windows area. Scott had been up many times before but not in January. We saw areas of snow in shaded areas which was sure to spice things up a bit. Scott led the way as we hiked across open desert toward the formation.

We entered a wide canyon and scrambled up as it slowly narrowed. We were then forced onto a ledge on the right side which was covered in about an inch of snow and was icy! The exposure was decent too. I ended up helping Scotts' kids and his wife up this section. Once above that, it was a short drop and then some slickrock scrambling until we reached the crux of the route. A 10 foot step that would normally be 4th class but a thin sheet of ice was covering it. I led the way with a rope tied to me and climbed around the ice. I set an anchor at the top and gave everyone a belay.

Amazingly, there was a large pack with a lot of excellent gear inside sitting atop this step. An $800 camera, a large guidebook and other climbing gear! We guessed someone threw it up to get the weight off but then couldn't climb up the step. We picked it up planning to return it to the rangers once we got down. We passed through a small saddle, then set the rope up through the bolts for the rappel. Yes, there was a rappel on the ascent route!

It took awhile for everyone to make the rappel as it curved quite a bit to the left as we rapped. Once everyone was down though, it was an easy scramble for awhile up the slickrock slabs. We veered slightly rightward and located the 15 foot chimney to reach the summit plateau. Everyone made it up easily and we were soon on the summit overlooking hoards of tourists walking around the arches below us. Even in January, Arches NP is crawling with tourists! I located many familiar areas including the Fisher Towers, Delicate Arch and the Moab Valley.

For the descent, we retraced our steps to the base of the ascent rappel, then continued down the obvious drainage. Scott was raving there will be a pool to wade through to reach the anchors but I figured it would be frozen. Sure enough, we walked right across on solid ice, I set the ropes and went first. There was a 10 foot long, 2 foot wide icicle hanging down as the rappel became overhanging and I had to be very careful not to break it off! If that thing broke and hit your head it would really hurt.

Slowly, we all made it down and from there, it was a short walk out. Since we were hiking right past Bullwinkle Tower, and I had all the protection needed, we decided to just climb that. The west side has a fun chimney route that climbs about 85 feet to the small summit. The only thing I didn't have was my rock shoes but my trail runners sufficed since it was a wide chimney. I led up, cranking through the so-called crux at the bottom easily (because I am tall!). I only needed a few larger cams to protect it and reached the anchors.

Scott tried next but wasn't able to finish the climb in the chimney, Kessler then game it a go and made it up pretty easily. He stood on top with me awhile while Shaylee tried. Was a fun little climb that was in the afternoon sun so it kept us warm. After finishing up, it was a 5 minute walk back to the car and off to dinner in Moab.

The next morning we agreed to head to the Fishers to climb a couple of the smaller rock formations. Kessler, Scott and I all climbed Dock Rock, which was awful, then hiked over to Lizard Rock which was much more fun. Lizard Rock is a nice 5.9 route that is not really deserving of its "R" rating due to a piton found 80% of the way up. By 3pm, Scott and his family started back to Craig and I made a bee line for Eddie McStiffs to watch the Seahawks play the 49ers in the NFC Championship Game. That was easily the best football game I have ever seen! Go Hawks!

Bullwinkle Tower is one of the squat towers in the Garden of Eden area of Arches National Park, UT. With two short routes, it is a fun climb to do if there are parties on the nearby (and much more popular) Owl Rock. It's a very short 10 minute hike from the road so is a great tower to climb if you have only a few hours to spare.

Arches National Park is just a few miles North of Moab on US 191. From Moab, drive north on 191 a few miles, passing the Junction with Highway 128 (River Road). Turn right (north) onto the main Arches National Park road and pass the enterance station and visitor center. The road climbs steeply out of the Moab Valley and after about eight miles from Highway 191, you will reach the turnoff to the Windows Area. Turn right here (which is right after Balanced Rock) and continue one mile down the Windows Road and turn left onto a marked turn-off which ends in a small parking area overlooking Elephant Butte. From the parking area, Bullwinkle is several hundred yards to the southeast (although not quite fully visible). Owl Rock is easily seen about 25 yards to the east. Get to Bullwinkle Tower by hiking around the south side of Owl Rock, crossing a small drainage and ascending the slickrock slopes to the base of the next closest tower immediately southeast of Owl Rock.

The west chimney is the standard route on the tower and is the obvious crack splitting the west side. This is a fantastic way to spend a winter afternoon when you need the direct sunlight to climb comfortably. The beginning of the climb starts on some low angle slabs which are can easily be scrambled up to reach the small saddle between the tower and a small knob just to the west. The first move is a short, 4-5 foot headwall which can be hard enough to require a shoulder stand if you are shorter. If you're real tall such as myself, it was nothing more than a 4th class move. Once at the base of the chimney, work the final 40 feet through it. There are good knobby holds and a couple chockstones than can be used for holds or protection. Halfway up there is a nice ledge with the final 20 feet requiring you to climb deep into the chimney and pull around and over the big chockstone guarding the summit.

Gear: Take one set of cams from 0.75" - 3" there is no real good places for anything smaller. TCU's work well too.

This route is a harder chimney on the opposite side of the tower. It is reported that Randall Weekley and Jonathan Auerbach had the first ascent while thinking they were attempting the second ascent of the west chimney! The climb begins about 10 feet off the true deck, and opens with a very committing move which can lead to serious injury in the event of a fall. Some people have given this climb a "R" rating. Use the same anchor at the summit per the west chimney route. 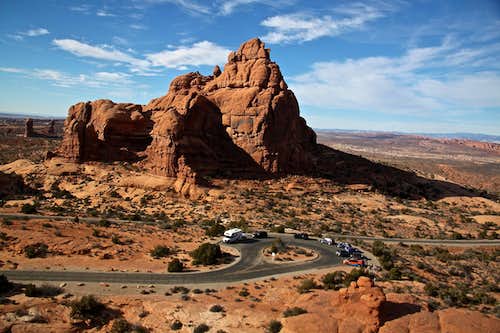 Descent - Descend the tower by making a single rope rappel off the convoluted anchor at the top of the west chimney. A bunch of slings are wrapped around a big rock and backed up by a couple old bolts. It's a good anchor but sometimes the slings get very old and should be replaced. 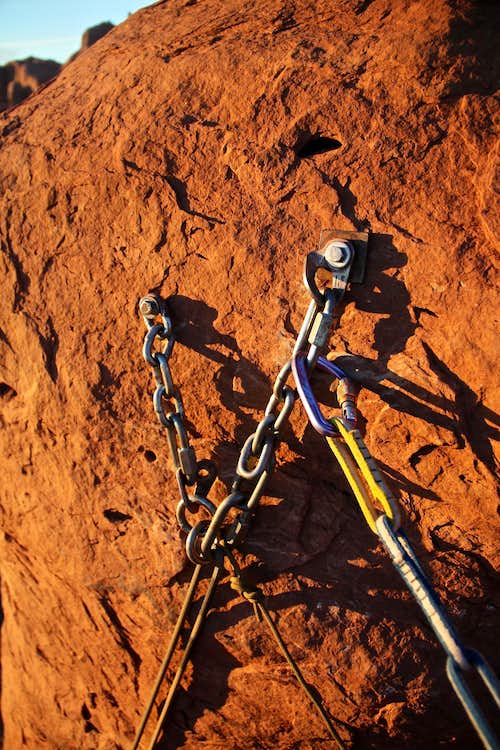 Poor bolts at the summit

Car camping is allowed in designated campsites only within Arches National Park ($10 per night). Backcountry permits are also available which can be obtained at the visitors center. Camping in Arches (and Moab itself) can fill up very quickly, especially on the weekends. Free camping in the area can be found on BLM lands in Castle Valley, Kane Creek, in Tusher Canyon located north of Moab about 10-15 miles, and a few other places.

Climbing in Arches National Park is only allowed if you use clean climbing techniques. Bolts and hammers are no longer allowed and cannot be brought into the park. Hand chalk must not be white but can be used as long as it nearly matches the color of the rock. Using rappel slings is fine however it is advised you remove and replace old slings. The anchor at the summit of Bullwinkle Tower was getting pretty messy with old slings one of which I removed. There are also a couple old pitons at the summit that looked safe.

Arches is a National Park, so National Park entrance fees (Currently $10/vehicle for seven days) and other regulations apply. Dogs are allowed only on leashes and only on pavement.

Check out Eric Bjornstad's guidebook; Desert Rock: Rock Climbs in the National Parks. This book has a good description for Bullwinkle Tower and can be found, along with other books in any of the gear shops and bookstores in Moab.