After spending four days cragging around Zion, Jacob and myself climbed Cowboy Ridge on Mount Kinesava. As was reported, it involved about 2000 ft of class 3-4 scrambling on loose, scary, Navajo sandstone and a single 5.7 hand crack pitch. Access to the ridge itself is unproblematic and the scrambling is fairly simple until the prominent notch. Some scouting is necessary to find the best way through, as the route often cuts to one side of the ridge or the other. The chimney up from the notch ends with a couple low-5th moves that are difficult with a backpack. From there the terrain eased back to scrambling grade and we headed up to the base of the technical portion, which, due to a crack misidentification, we did in three pitches instead of one. I led the first which went up to the sloping ramp to the first tree with a rappel anchor. This was one loose crappy climb. The second followed the crack directly up and to the right, and then around a series of ledges to a tree on the exact opposite side of the first pitch, but directly below the third. Once there I realized that we could have easily bypassed that area through a notch above the first belay tree. The pitch itself was very mellow – a hand crack with plenty of features and rest stances. I would not argue the 5.7 rating, but compared with other Zion 5.7s (Cave Crack, Just Another Jamb), it was more like a 5.5. The first crack (second pitch for us) Jacob led was more of a typical Zion 5.7. Above the actual 5.7 pitch is an extended section of 4/low5th friction scrambling that we soloed through still wearing our rock shoes, and then a short hike to the summit of the ridge. The scramble up to the true summit of Kinesava was simple enough, and mostly class 2. The high flat area between Cowboy Ridge and the true summit was a lush beautiful area and there is supposedly an awesome petroglyph display that we couldn't find. We were worried about the east face descent but found it to be well marked by cairns. We just located the right spot to leave the high flat area by following footprints and finding where the large ramp starts down. If you see a big cliff head further right! There were a couple sections of class 4 down-climbing but they were not too bad and we did not have to rappel. The photo above shows Cowboy Ridge and our ascent route in green and our descent route in blue.

Gear Notes:
We read contradictory reports. I would say nuts, single cams .5-3, double 1s. Jacob placed 5 pieces on the crack and had a bit of a runout because we brought doubles of 2 instead of 1. Three quarts of water was enough, but more would not have hurt. We wore hiking boots and brought rock shoes, the pitch would have been very doable in approach shoes.

Approach Notes:
The new approach is fairly direct, you follow the Chinle trail from the new lower trailhead and when it starts following a dry creek bed, continue up the creek bed, cross the road once again then follow the wash as it heads north. The barbed wire fence is easy to go under in the wash. Just above 4,000 feet elevation, leave the wash and aim for a gentle ridge just right of the wash that breaks through the lower cliff band. Continue north up to a small notch with power lines and up a second ridge to a bench where you cut left (west) aiming for the end of Cowboy Ridge. 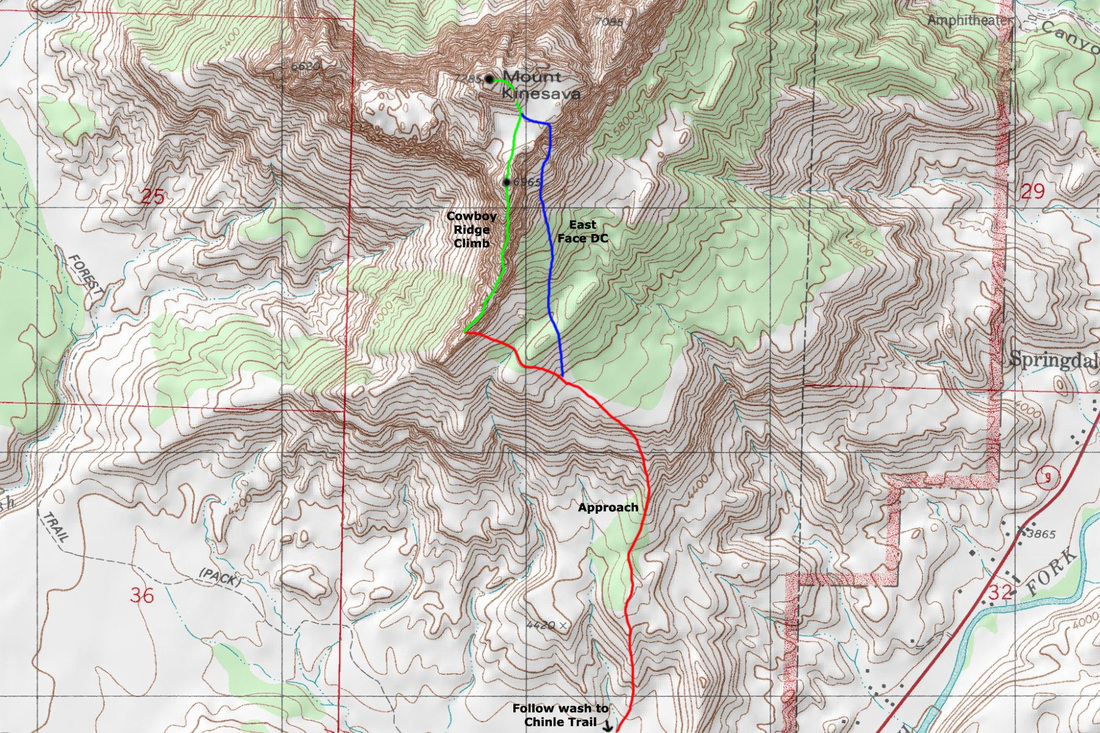 Map showing our route up and down