After visiting Zion and exploring Birch Hollow with Emily, we drove back to Las Vegas and decided to go for the Frogland Route, which would be the first time I climbed in Red Rocks outside the scenic loop drive. This was nice because it meant we didn't have to pay to get in (although with my access pass I never pay anyways). I drove Emily's VW Golf up the rough dirt road to the trailhead for Frogland Buttress, and we made the 1.5 hour hike up to the base of the route, which of course was filled with tons of people! One group of 4 from Czech was on the route just above when we started.

We tied up Emily's little fluff ball in a shady spot and I started up the first pitch. It was clear I was a little bit rusty from a summer full of mountaineering. I hadn't been on sandstone since April, but I got back in the groove pretty quickly. The huge flake right at the beginning was super sketchy though, and waiting to fall off! I caught up with the group ahead of us at the first large tree anchor, and waited there for 25 minutes before belaying Emily up. The second and third pitches were pretty simple, apart from an offwidth variation I did to get to the ledge just below the leftward traverse crux. I was about 40 feet above my last piece when I was climbing this wide crack, and I didn't have anything big enough for it so I had to keep climbing to the belay ledge, where I was forced to wait again for 25 more minutes!

I then led the leftward finger traverse and continued up an airy ridge. The climbing got pretty thin and I weaved way to the left to be able to get a cam in, then had to weave back right to pass the lone bolt. I was conistently 30 feet above my previous piece on the second half of this pitch, which I didn't realize I was combining the 4th and 5th pitches until the rope drag became unbearable. I got to a small ledge just a bit below the big chockstone with a great place for a trad anchor after pulling through a thin 5.8 section with 50-60 pounds of "extra" weight with the rope drag! Emily followed nicely and I then made a short pitch up the stem box and through the chockstone. The final pitch I ran out the rope to within a few feet of the top. When we topped out the sun was just about to set, so we hurried down the scramble descent located down to the left on the opposite side of the formation. Cairns marked the route very well. The dog wasn't eaten when we returned to the gear stash and we hiked back under twilight. The BBQ in Vegas afterwards was amazing, and we managed to find an Air B&B for the night at the last minute. 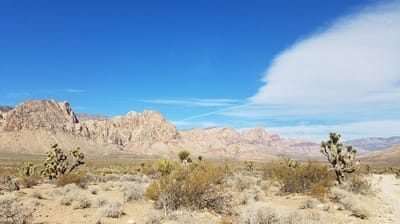 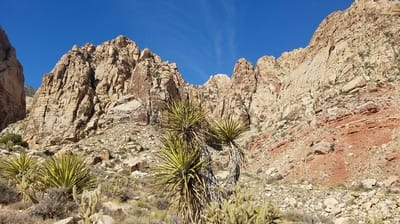 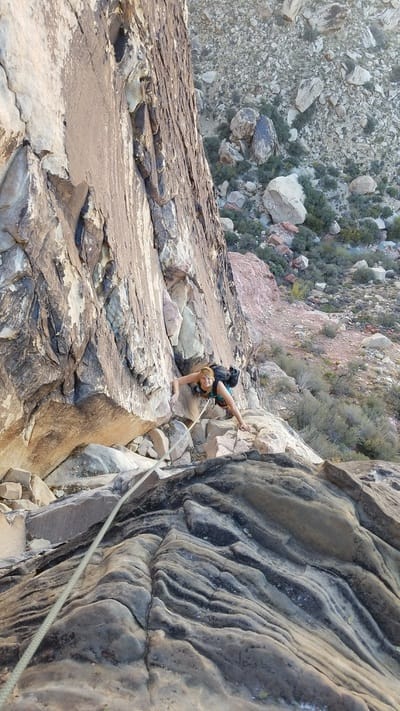 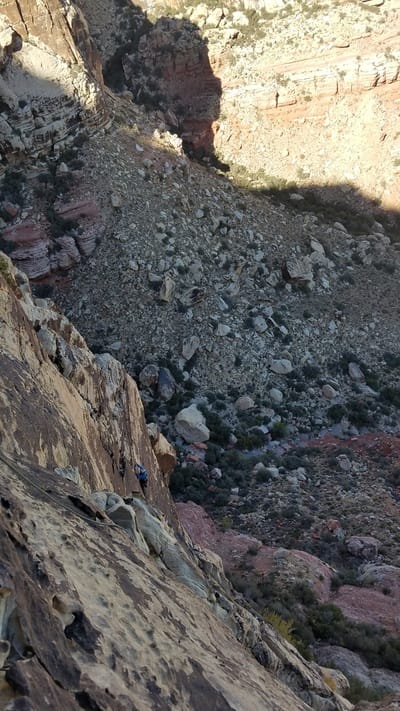 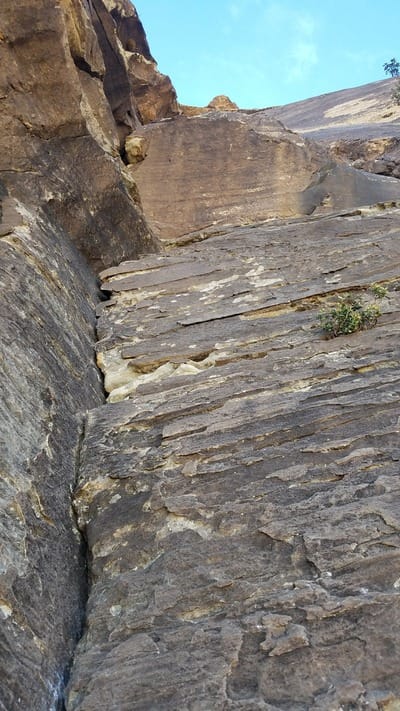 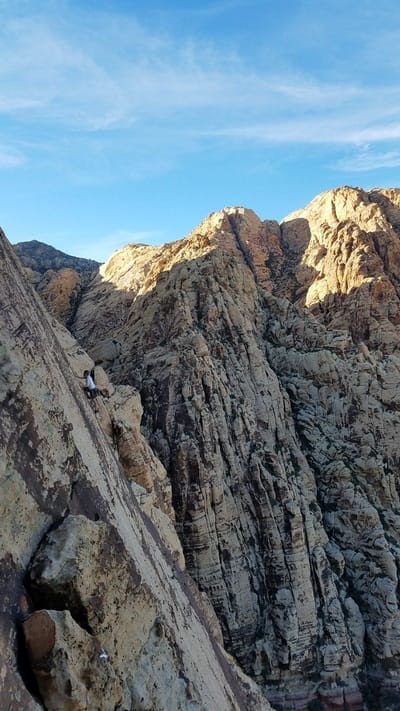 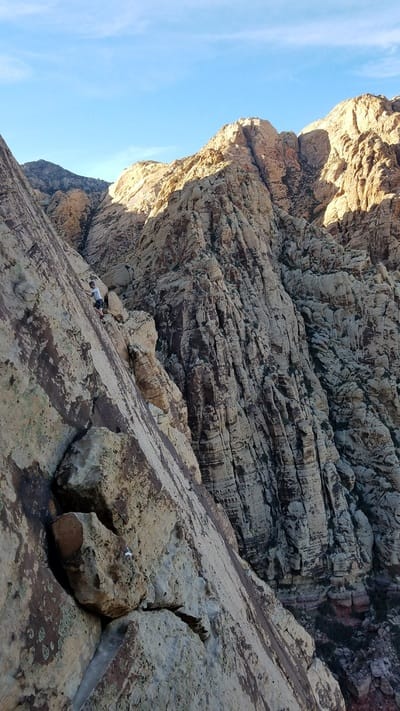 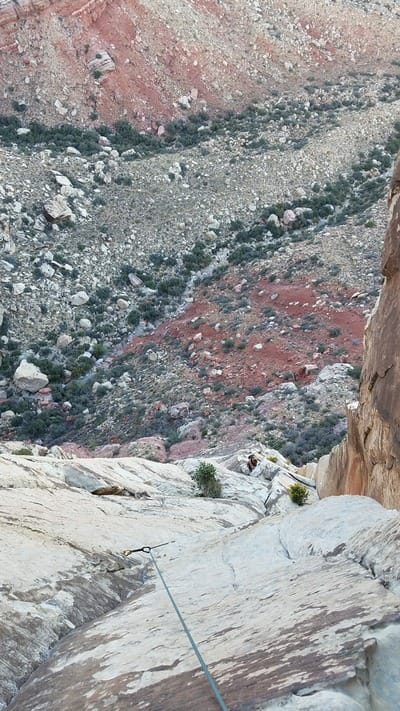 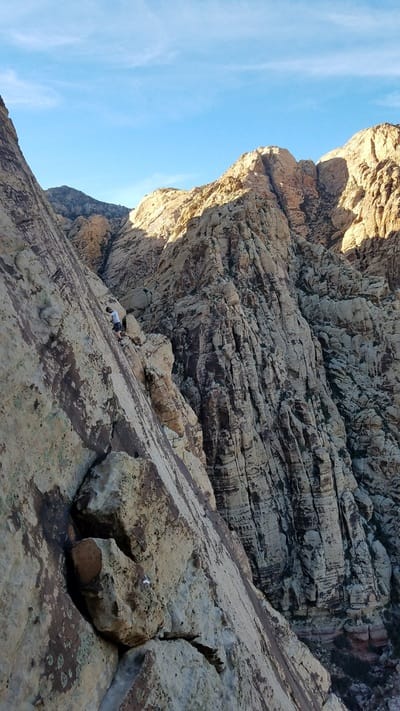 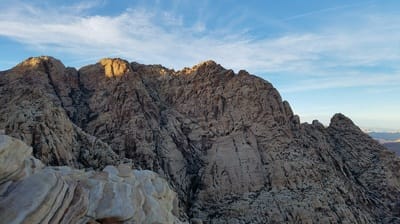 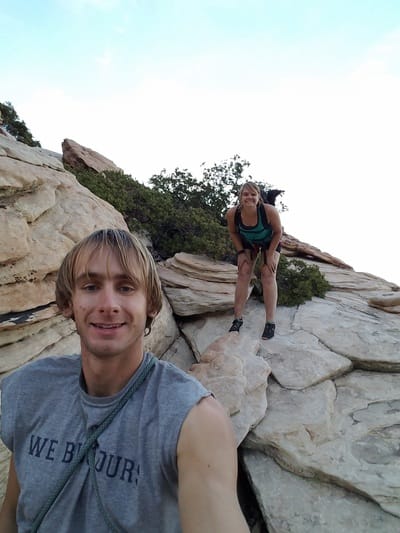 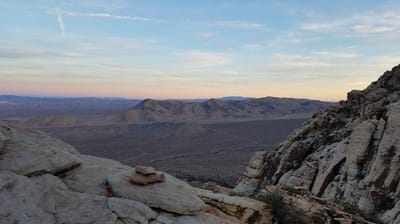 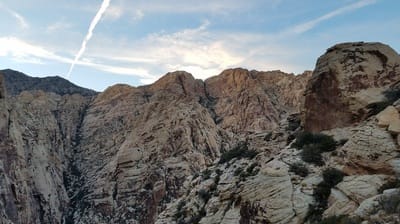 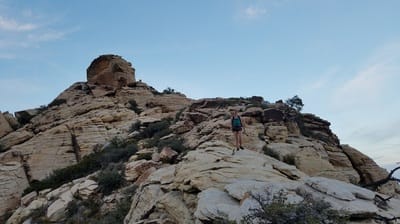 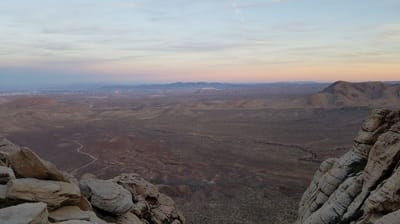 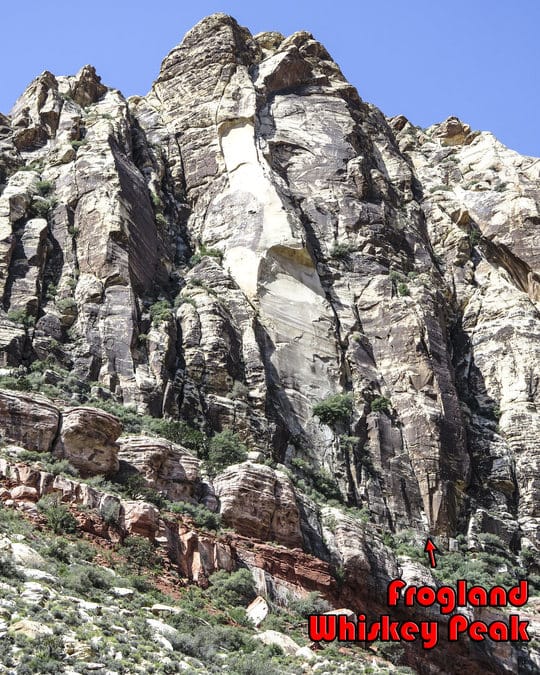 Overview of the route, with the start labeled. The descent is off to the left out of view