About 35 miles southwest of the unlikely town of Cody, Wyoming, in the southern Absaroka mountains, is an area sporting the highest concentration of frozen waterfall ice routes in the continental US. Among ice climbers, this place used to be a best-kept secret however the word has spread. It is said that if you can climb well here, you can climb well anywhere. There really isn't point in going unless someone in your party can lead WI4's solidly.

Roadside ice, short approaches and toproping are not what you will find in the South Fork area. Approaches tend to be relatively long with possible river fords and abundent elevation gain. This isn't the best place to take beginners. The classic long routes here mostly follow creek drainages where you might climb a pitch or two, then walk up snow in the drainage to the base of another pitch. Interspersed there might be sections of WI2-ish ice bouldering which you may or may not want to rope up for.

Descents tend to involve a mix of down-climbing and rappelling off bolts, slung trees, and v-threads. Definitely know how to make a v-thread and bring extra v-thread material and slings/rings to reinforce tree anchors. Be mindful that bolts have been known to shear off in summer storms which will sometimes rage down these creek drainages. Some routes have walk-offs, but these are few and far between. The area is remote, and the nearest help is a long way off, so self-sufficiency here is important.

The rock is a mix between layers of volcanic conglomerate not unlike that found in the Pinnacles of central California, and a sandstone/shale units. All in all, the rock is not good! Locals say that rock gear is not of much use here, perhaps just bring a selection of pitons however most routes protect fine with ice screws unless you're going after one of the hard mixed lines. "Kitty Litter" seems to be the popular nomenclature for the rock quality here.

From the town of Cody drive west towards Yellowstone passing by the Sierra Trading Post and turn left on South Fork Road (State Highway 291) just after passing the Wal-Mart. There is a sign so it's impossible to miss. Drive about 45 minutes towards the southwest on this road which passes along the south of the reservoir, then ascends a bench above and to the south side of the river before descending and crossing to the north side of the river. Shortly after the bridge, you will come across the first drainages that contain ice on both sides of the valley. The pavement ends about 32 miles from town, and becomes unpaved gravel. High clearance isn't necessary, though in some very snowy/icy conditions 4WD might be useful. Cody is served by the Cody-Yellowstone Regional Airport. South Fork Map as seen in the "Winter Dance" Guidebook

The definitive guidebook to the area is Winter Dance : Select Ice Climbs in Southern Montana & Northern Wyoming, Joe Josephson, First Ascent Press, 2004. The book has a map of the South Fork area, approach notes, first ascent stories, and lots of great photos. The old guide / map is noted for having some pretty serious sandbags which is mostly corrected in Winter Dance. It's a cool piece of history though with some of the most vague route descriptions I have ever seen. It's argued that ratings in the WI3 to WI3+ range are still a bit stiff so be prepared. Actually, the entire area still has an old-school atmosphere and all the routes are stiff. As an example, the first 3 pitches of Broken Hearts are rated WI 3 and are all in the 80-85 degree steepness range. Some WI 4 pitches here are plumb vertical!

Below is a table of the main routes in the South Fork area ordered by difficulty. All these routes are great and worthy of whatever approach it may have. Now there are certainly probably 10 times as many routes in the South Fork area than what is listed here so I have only listed the classics. If you're looking to avoid the crowds, dive into the more obscure drainages or stick to the south side of the valley where there are fewer moderate routes.

This area is located mostly within the Shoshone National Forest's Washakie Wilderness.

Dispersed camping regulations may apply outside of established campsites (which are likely to be closed in winter). The Deer Creek Campground can be used year-round.


If you're looking for lodging in Cody, a good place to go is the Robin's Nest B&B.

Bighorn Sheep - Upon entering the South Fork area you will see signs that say "Don't Stress the Sheep". This area is a crucial winter range for bighorn sheep. Stay as far clear of them as possible, don't spook them, be quiet around them. They may seem unaffected and nonchalant, but if they look frightened or nervous, walk away. These sheep can be literally "frightened to death". Also be careful about hiking below then as they are very good at knocking rocks down on you!

Grizzly Bears - During early and late season (October, November, March, April) it is said that you may see grizzlies in the area. Make plenty of noise on the approach, and carry bear spray. Don't leave lots of extra food in your pack at the base of climbs or leave food scraps around.

Access Note - Ice climbers should be aware that if wildlife concerns arise, access may be limited by the USFS. There is a bunch of cragging opportunities just west of Cody along the road heading towards Yellowstone. Notable area include the Bridge Bands which are made of white limestone and offer many challenging single pitch sport routes and a few trad lines. It's a 15 minute hike from the parking area and this area always sees sun, so on mild winter days it is comfortable to climb here. The Island is an area situated between the first two short tunnels, and the long one right next to the highway. You must park off the road before reaching the first tunnel though, and walk the road through the first two short tunnels, then the climbing area will be to the right. Many sport lines on solid granite. There is also a couple nice trad routes. All single pitch with the exception of a couple routes that top out well above the tunnel.

The lower gorge (to the left of The Island) has many sport and trad lines and is accessible either from parking at the gate on the service road and walking the road right alongside the river, or paring as per The Island and hiking/rappelling down towards the river and meeting the same service road. Consult Sunlight Sports in downtown Cody for guidebooks, photos and beta for these climbing areas. I'll simply show some photos and some overview maps to show what the area looks like. 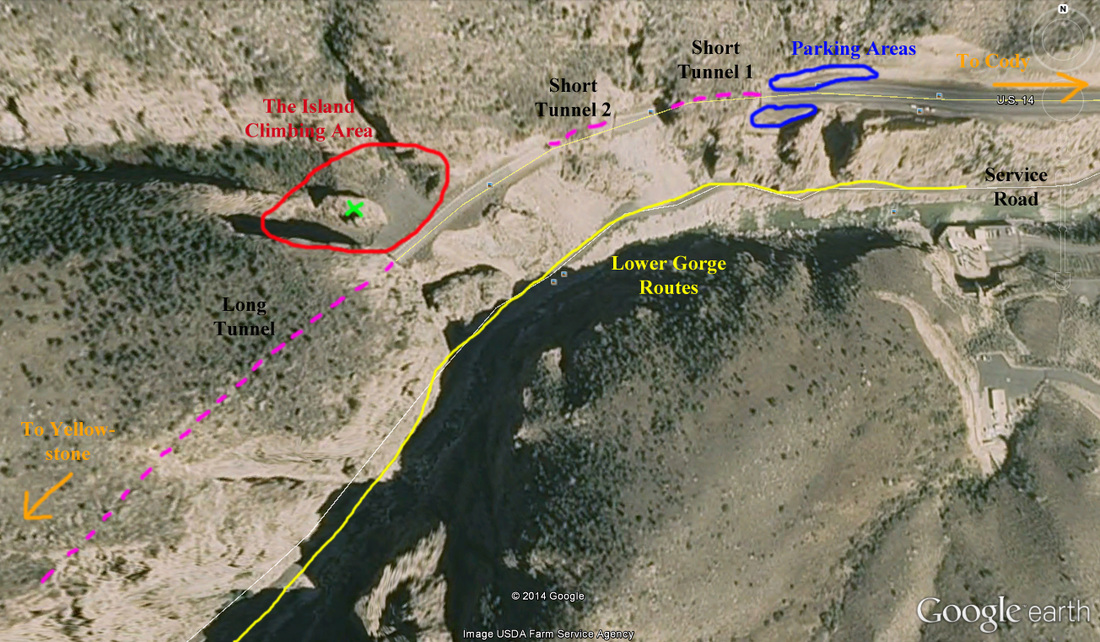 Google Image of The Island, and Lower Gorge Climbing Area. The Green "X" shows the rock formation known as "The Island" and there are routes on the south, east and north sides of this feature. The north facing wall just south of The Island (attached to the long tunnel), also has harder routes.