My Castle Rock/Darlene Mountain page on SP
​MY POINT 12,540 PAGE ON SP
​MY SKY PILOT MOUNTAIN PAGE ON SP

I didn't know it at the time but this next part of the trip would be the best of all. After an entire day of rest we made our way over Beartooth Pass for the first time since we arrived in Montana. We joked we were probably the only people to come to Red Lodge and the Beartooth Mountains and wait nearly 3 weeks before driving over Beartooth Pass! The pass was actually really nice and we saw the famous view of the Bears Tooth from the top. As we descended the other side the feel began to change. Just as we arrived at Beartooth Lake we turned off the highway and parked at the small trailhead for the Beartooth High Lakes Trail. Beartooth Butte lie just behind and is the only sedimentary rocks found in all of the Beartooth Mountains and have baffled geologists for some time. The trail first follows right along the shore of Beartooth Lake which was very muddy and swampy. Since we wanted dry feet more than anything else at the moment we whacked through the forest further to the east and headed around the swamp. We ended up wasting an hour trying to get around that stupid lake and it passed Huckleberry Lake as the lake I hated the most. We managed to find the trail on the other side of the lake and continued up the gentle slopes heading up the Beartooth Plateau. We reached the junction with the Clay Butte Trail (which we should have taken in the first place!) and continued to Native Lake where we saw some day-hikers. However we quickly continued up the trail which was obviously used a lot by horses passing one beautiful lake after another. We reached an unnamed lake just south of the state line. We had been hiking in Wyoming for this first part of the trail but we crossed the state line and didn't see a big line on the ground...but we marked the exact tree! We continued past Marmot Lake and found a great place to camp between Wright and Martin Lakes near the end of the trail. We tried fishing in Wright Lake but all the fish were tiny and not worth eating. We continued the next morning around Martin Lake and off the trail at this point. We climbed up over a small saddle and the views we saw from there had to be some of the best views of the entire trip without a doubt. The entire Castle Group was visible from Snowbank Mountain all the way east to Castle Mountain.

Caste Group from the small saddle

From this point it was a short walk around to the north and east to Crystal Lake where we decided to set of camp for a few days. This lake was hands down my favorite of the entire trip to Montana. One of the most beautiful alpine lakes I have ever seen. We hiked around it to its north side and set up the tent. We took the rest of the day to relax by the lake and caught a couple big fish which was very nice. We cooked these ones in the stove since we were above treeline. The sunset over Sky Pilot Mountain was beautiful and we went right to sleep. 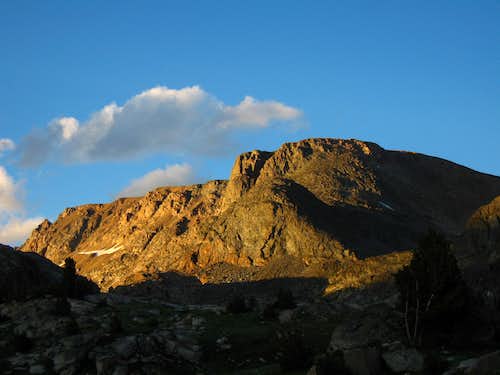 The next morning we woke and Stephan opted to wait out the easy climb of Sky Pilot Mountain so off I went. It was not very far and I simply walked up the easy grassy valley towards the peak. An easy talus climb brought me to the south ridge and a very gentle ridge walk brought me to the highest point at the north end of the ridge with fantastic views of the whole Castle Group, Varve Lake Below and all the way to Pilot Peak to the southwest. 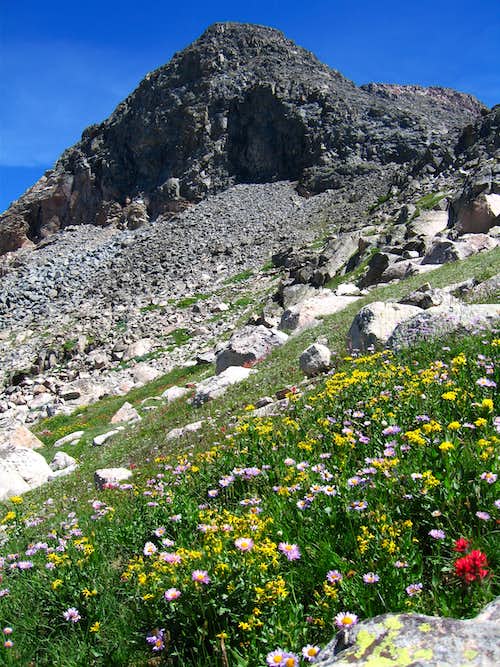 I made the quick return to camp to which Stephan was surprised I was back so soon. It really was a short ascent so we fished some more and relaxed in the sun the rest of the afternoon. Knowing the weather forecast we decided to try and tackle all 4 peaks in the Castle Rock Group the next day. Dinner that night was difficult because the mosquitos were the worst we had the whole trip at Crystal Lake. This was the only downside to this beautiful lake was that it was the only place so far in all the Beartooth Mountains we had been to where the bugs were unbearable. We had to down the rain gear to keep them away. After dinner we went to sleep and woke around sunrise the next morning. We started quickly towards Flat Rock Lake and on to Varve Lake. We finally got some sunshine at Varve Lake but the bugs here were the worst I have ever seen. I don't think they were mosquitoes because they were bigger and I really didn't get bit but I could hardly breathe they were so thick. We continued to Navajo Tarn and to an unnamed lake at 11,000 feet which was formed by the retreating Castle Rock Glacier.

I went on ahead of Stephan so I could climb Point 12,540 but I was almost clueless as to what the route was. All I knew is that it wasn't 5th class and it wasn't on the east or north sides of the peak. So I studied it hard from Navajo Tarn and didn't see a feasible route on the south side so I figured it must be somewhere on the west side which was good as this would prevent backtracking as Castle Rock Mountain was the next peak to the west I had to also climb. I continued up on the talus at the base of the cliffs on the west face of Point 12,540. As I got closer and closer to the west ridge I began to worry I wasn't going to find the route since steep cliffs covered the whole side of the peak. However right as I got to the west ridge, I noticed a deep gully and broken terrain near the ridge crest and I saw a feasible route. See this page for the description. The summit of this peak was a very lonely place. It did have a flat top but it was a small area and only a tiny cairn marked the top. Only people wishing to climb all 26 of Montana's 12ers would climb this peak so I knew I was one of only a handful people to be there. Looking down on Castle Rock Spire was interesting as well. Unfortunately it was a very smoky day and the clarity was very bad so I snapped a few photos and continued on back to the Point 12,540 and Castle Rock Mountain saddle where I met Stephan. We then continued up the easy east ridge of Castle Rock Mountain. The view of the entire traverse to Point 12,090 was visible and I continued north on this class 3 traverse to another very lonely place. Point 12,090 lies off to the north of the Beartooth Crest only accessible from Castle Rock Mountain or Whirlpool Creek, and this creek is a real pain to get to.

Views of the north faces of the Castle Peaks began coming into view and I was in awe at some of these aspects. Looking down into the Whirlpool Creek drainage knowing how few people come up there I felt more solitude on this peak than anywhere else the whole trip. The north face of Point 12,540 was so amazing and the couloir leading up the the saddle just to the east was the route taken by some of the best mountaineers to walk the northern Rockies many years before.

I returned to Castle Rock Mountain to meet with Stephan again and we continued the easy traverse to Darlene Mountain, another lonely place. We glissaded down the southeast slopes of Darlene Mountain and descended past an unnamed lake and then to bug infested Copepod Lake which eventually fed back into Flat Rock Lake (which has two inlet streams). I was shocked to see a big party of campers at Flat Rock Lake. We exchanged greetings and where we had been and was happy to have finished out big loop and finished the descent back to Crystal Lake where another mosquito infested differ awaited us. We went to sleep right away after a nice swim in the lake.

The next morning we had a cloudy and uneventful hike back out but instead of hiking back around that swampy Beartooth Lake we hiked the Clay Butte Trail along the west side of Beartooth Butte which went very smoothly and when we reached the trailhead, I ran the Clay Butte road and highway a few miles back to the car at the other trailhead. At this point we drove to Cooke City and had a very large meal and talked about what we wanted to do next. We ended up driving to the Aero Lakes Trailhead and camped the night but decided against climbing the Mount Villard Group as I wanted to save those peaks for another time of year. We decided to go climb the Grand Teton and Stephan would fly back home from Jackson, Wyoming afterwards. Stay tuned for my TR to come for out climb of the Grand Teton and part 3 of the Montana Beartooths Adventure which will come sometime next fall once we finish climbing the 12ers we missed this time around. Thank you very much for reading and I hope you enjoy the photos!