In March 2010 while I was on spring break, we took a trip over to southern Utah and had a blast. Started the week with Bluejohn Canyon. Drove the entire Notom-Bullfrog Road the second day in a raging blizzard and got to the Halls Creek Overlook Trailhead (managed to avoid getting stuck amazingly). Did the Halls Creek Shortcut route and hiked through the narrows the third day. The forth through the sixth days were spent in the Grand Staircase Escalante NM. The final three days were spent doing a backpack in the Moroni Slopes area in the San Rafael Swell. We started at Salt Wash where we parked and the plan was for an epic loop hike (about 33 miles) that involved hiking up Salt Wash (mind you it was still flowing after the very wet winter of 09/10) and climbing Black Mountain. Next was the hike up Last Chance Wash and the climb to the "Fryingpan". It would finish with a long cross country walk to the summit of Horse Heaven and beyond. A road walk down the dugway into Segers Hole and a climb up to a point on the swell before descending the slopes back to Salt Wash near the mouth of Cable Canyon. The home stretch was a hike back up Salt Wash to meet the car. See the Google Earth image below to see the route taken.

This loop was completely customized to meet what I wanted to do and was nearly 100 percent cross country. No evidence of any human activity was seen the whole time and to top it off, winter still left its mark as all the washes were still flowing making for miles of barefoot travel. This two night backpack was one of the best I've done.

Friday in the third week of march we drove down the dirt road to Salt Wash. There were some storms off and on so we waited around awhile and finally started hiking around 3pm. We were treated to some very nice views to start out with. Here are a couple panoramas of the San Rafael Swell from where we parked.

Panorama of the San Rafael Swell from Salt Wash

Panorama of the San Rafael Swell from Salt Wash

Salt Wash was still flowing with dirty water since the winter of 2009/2010 was extreamly wet in southern Utah. There was five feet of snow was measured in Escalante in January and there was still lingering snow on the shadowed areas around the Moroni slopes that proved essential for a water source since the springs I knew existed were hard to get to or dry. We walked the remainder of the road as it weaved through the Entrada reef and entered the Salt Wash narrows. These narrows wasn't like a slot but it was a respectable canyon.

Shortly after starting up Salt Wash we realized we were going to have to go barefoot as it was going to take for ever taking the shoes/socks on and off for 7 miles. We worked our way through the narrows of Salt Wash crossing the stream maybe 50 times. It was a great afternoon and warm but the water was freezing.


The sun began to set just as we got to Caine Springs. This was a beautiful area where it was a little lusher and we were able to fill up water bottles with the salty spring water that wasn't riddled with sediments (that tasted wonderful!)  Shortly after passing the spring we looked behind us and saw the last of the suns rays hitting Factory Butte way in the distance.

Shortly after this point we found a semi-decent place that was mainly flat to pitch the tent. We camped right near the black dike arch.


We quickly started to get going as it was pretty cold. We passed underneath the arch and was happy to see the canyon area opened up so we didn't have to cross Salt Wash anymore. We stayed on the south side of the stream and followed the towering Entrada cliffs the rise up as a small plateau known as Wood Bench.


A little later we came to the junction of Salt Wash and Last Chance Wash. Here we dropped the packs and headed up for Black Mountain. The climb was very nice with some areas of scrambling. There was even some snow left near the summit.

We got to the summit around 10am. There was lots of glare but I managed one decent panorama looking down to Cathedral Valley. The view the other direction didn't have the best lighting but I re-climbed Black Mountain in May 2010 and got this panorama looking towards the Moroni Slopes (I'll discuss the re-climb at the end)

Cathedral Valley from the summit of Black Mountain

We descended and got back to our packs. The only other living things we saw were the cows drinking from the washes.

Part 2 - Black Mountain to the dugway

We started to head up Last Chance Wash which was also still flowing so once again our shoes came off. The cold night helped a little by hardening the clay that seems to suck you under when it's wet. we passed by the mouth of Corral Canyon and found our break in the cliffs that allowed for an easy ascent northward towards the Fryingpan. Once we got to the Fryingpan catchment we saw a road and we noted that one would be able to drive here from I-70 (which is what we did in May). We didn't stay on the roads though and went for a strait line towards the Segers Hole Overlook.

We came across many large towers of rocks that looked like they were built by Indians. They were at the top of every hill throughout the Horse Heaven area and were around 6 feet tall. Apart from that the walk across the desert wasteland was a long slog on mainly flat lands with packs. We finally got to the cliffs overlooking Segers Hole about an hour before sunset.

Part 3 - The dugway to the car

This was the last day of our spring break and we made it a good one. We descended the dugway and walked the old ATV road through Segers Hole. This was a nice walk with nice overlooks into Segers Window Canyon. Since this canyon is very technical and we didn't have any gear we were restricted to return routes that are used by people who actually do the canyons in the area canyon. These routes follow the canyon rims. Actually almost all the canyons that drain the Moroni Slopes (Cable, Segers Hole, Segers Window, etc) are technical but it was very nice walking high on the rims between these canyons. Passed by a long basaltic dike cutting through the sandstone layers. I was very interested as geology is what I study. It was miles and miles long and could be followed to the basaltic vent in the background.


We weaved our way around these canyons and climbed a short scramble up to a high point on the San Rafael and were astonished with the view.

From here it was a quick 1500 foot descent down the Moroni slopes back to Salt Wash. This was a knee banger descent as the surface rocks were flat "glass like" plates of the Carmel formation and they slid all around.
Once we returned to Salt Wash we finished the last couple of miles back up Salt Wash to get back to the car.

I loved the area so much that after the spring semester ended I returned and re-climbed Black Mountain with a different friend. This time we took the network of dirt roads and parked at the Fryingpan catchment. We descended Horse Heaven canyon (the only non-technical one that drains the Moroni Slopes). The mouth of this canyon would dump us out right at the Black Dike Arch, the same place we camped back in March. This canyon was very nice and solitude was a guarantee. Once again the whole area around Black Mountain and the Moroni Slopes was deserted.
This time we did a day hike down this canyon and from here it was a repeat of a portion of my March route back to the Fryingpan catchment. We climbed Black Mountain again on the way. All the washes were dry by now which made hiking a little easier.


This last one is the same Entrada cliffs in the photo in section 2 above...just taken a couple months later.

This is probably one of the most remote areas in the country and I enjoyed every minute I spent there. I would put money and bet that I was the only one in the area from January 2010 to June 2010. If anyone else has been here (not including Cathedral Valley) please let me know as I'm very curious to know if anyone else was here in the first half of 2010.
Black Mountain is one of my favorite summits and I'd return to explore more of the area in a heartbeat! 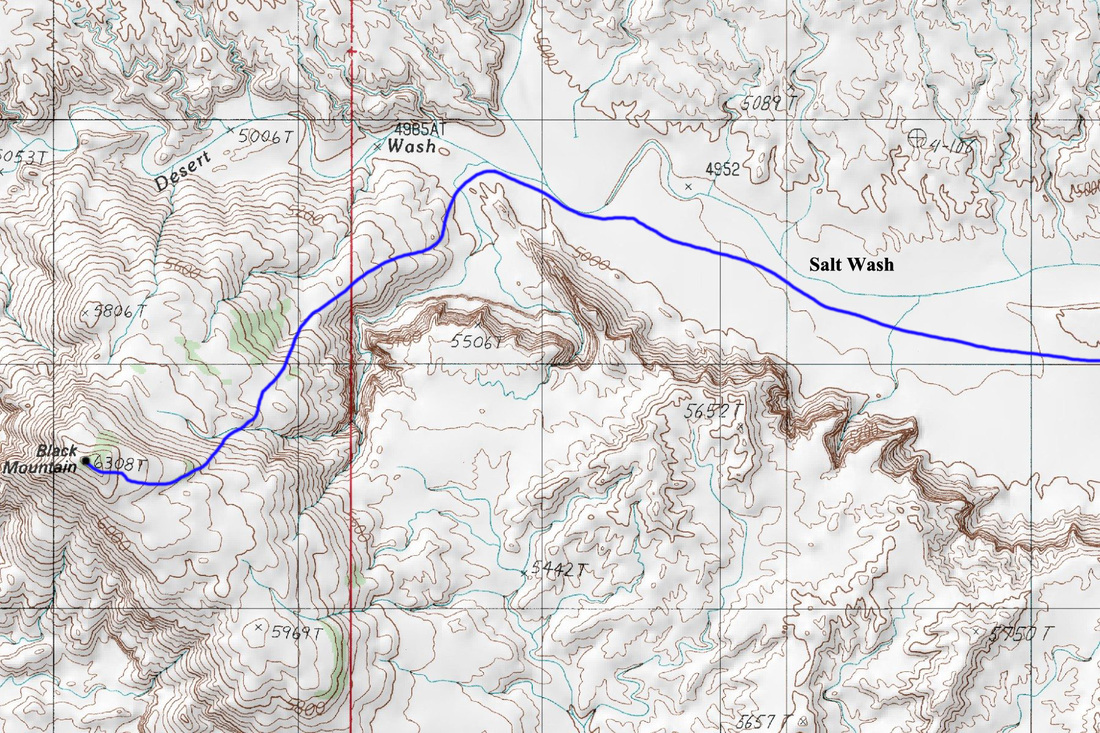