The Elk Mountains are perhaps the most beautiful mountains in Colorado and is easily divided into three regions, all having widely different characteristics. The most popular, and famous of these regions has to be the Maroon Bells Snowmass Wilderness which encompasses the Maroon Bells, Capitol Peak, Snowmass Mountain, and the Conundrum and Taylor River area. The second most photographed mountain in the US (Maroon Bells) lies here and photographers from all over the world come to Maroon Lake at sunrise to try and capture the beautiful, iconic view. The second region is the Raggeds Wilderness, which is home to Chair Mountain, Ragged Mountain and the Treasure Mountain massif. This region is lower in average elevation, and far less visited but still beautiful. The third area is the West Elks Wilderness with the Owens massif, West Elk massif and the Anthracite Range. This area used to be home to 20,000 foot volcanoes merely 35 million years ago. Today, remnants of these huge volcanoes is found as faint calderas and thousands of feet of volcanic tuff deposits. Combined, all three regions provide an awesome glimpse of Colorado's spectacular mountainous terrain.

The majority of the high peaks in the Elks have wilderness designation, making the area protected. Nearly every peak is rugged, steep and aesthetically pleasing. Crystal clear streams, pristine alpine lakes and lush green vegetation are common as well as clear, crisp air most of the year. While most of Colorado may be covered in smoke from summer wildfires, the Elks typically manage to escape the smoke each summer. This may be due to the fact they collect more winter snow, and more rain during thunderstorms in the summer.

The scenic beauty of the Elk Range is primarily a result of its unique geology. There are two very distinct geological types of rock that are clearly evident in the Elk Mountains. The younger rock is the tertiary aged granitic intrusive body, and the older, red and stratified sedimentary rock that encompasses the Maroon Bells is the Pennsylvanian aged Maroon Formation (equivalent to the Fountain Formation on the east slopes found at Red Rocks). The whitish, gray granite is known for forming the sweeping, knife edge ridges found on Snowmass Mountain, Capitol Peak and the Chair Mountain massif.

Apart from mountaineering and climbing, which is stellar in the entire region, the Elks also provide one of the best places in Colorado to go backpacking. The 4 Pass Loop hike is perhaps one of the most popular treks in the country. Like the name suggests, this 34 mile loop hike which begins at the Maroon Lake Trailhead crosses over 4 major passes each over 12,000 feet in elevation, and providing a grand tour of all the Elks have to offer. The banner photo above was taken on this loop hike at sunset on a crisp October day in 2010. 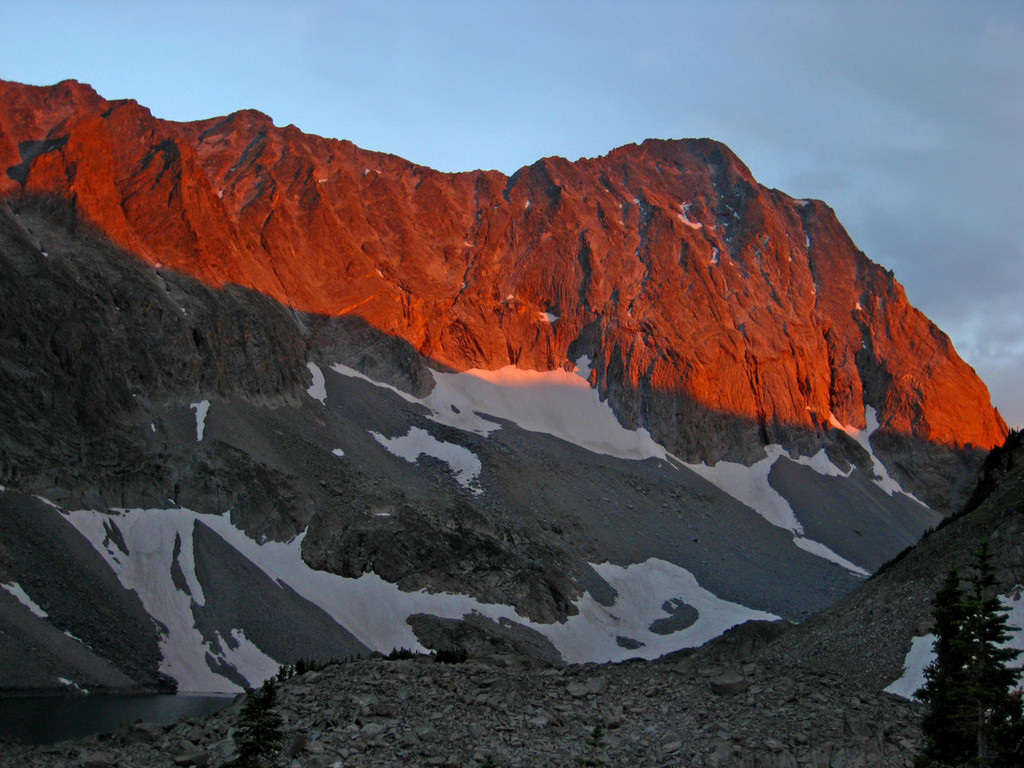 The Maroon Bells from the 4 Pass Loop in October

Click on one of the numbers on the overview map below to see a large version of the corresponding quad. This is pretty cool and covers the entire Elk Range. Table was originally constructed by Kane