The climb for George Benchmark starts at the Capitol Gorge trailhead. Get to the Capitol Reef visitor center at the intersection of Highway 24 and the Scenic Drive. Drive the 10 miles south on the scenic drive making sure to pay the requested $5 donation. When the pavement ends continue on the Capitol Gorge dirt road three more miles to the trailhead (road closed in winter). This is a good road passable to all vehicles when the gate is open. We did this climb as the tail end of a long 2 week road trip through southern Utah. I remember trying to climb this with Josh a couple months earlier in March while we were in the area but the dirt road to the trailhead was still closed off due to the extremely wet winter of 2009/2010 in Utah. Water was still flowing over the road well into March! Anyway, this time around the road was open and we rolled into the very crowded parking lot.

We started out on the popular Golden Throne trail. The trail was mainly uninteresting but some morning clouds made the climb nice and cool. Knowing the day was going to clear up I didn't bother taking any photos on the way up. Upon reaching the end of the trail we rested and took in the sheer size of the Golden Throne and saw the goal just to the north of the throne.

The route from here on was cross country and only a few cairins were seen. This made us happy as we knew that very few people make it out this far. We continued our way up the slickrock heading west. Upon reaching the top of the slickrock slope we turned right and headed due north staying east to avoid the cliffs that dropped off to the west. We hit the small sandy stream bed that was a key point in the route and continued northward towards Ferns Nipple. When we got a good view of George Benchmark we left the stream bed and headed for the northwest slopes.

See Dean's page on George Benchmark for more descriptive information about the route George Benchmark  The crux of the route was one class 3 move climbing up a series of small ledges on fairly steep slickrock. This section was pretty small but did have a little exposure. I would say that anyone with a little outdoor experience would be fine. From here we simply climbed up the north slopes. Some scrambling was involved but was mainly a steep slope climb. When we reached the summit the clouds receded and the sun came out nicely for the sun to hit the landscape that surrounded us. There were two benchmarks; one that was loose and just sitting there and another that was secured. From the summit, I was able to (luckily) capture a complete 360 degree panorama. This would be my first one I was able to put together and make it look very nice. Below is a sliding panorama from the summit and the second one (same photo) is a link to the full size photo.

After sitting around enjoying the massive views of nearly the entirety of southern Utah, we finally started the descent back to the trail. Since the sun was out now I was able to get a nice panorama of Golden Throne.

Once we got back to the trail we saw many people and the two miles of trail back to the car was as any trail would be. Altogether though this was one of the best summit views I'd ever seen and I will remember it for the rest of my life and will definently return sometime. 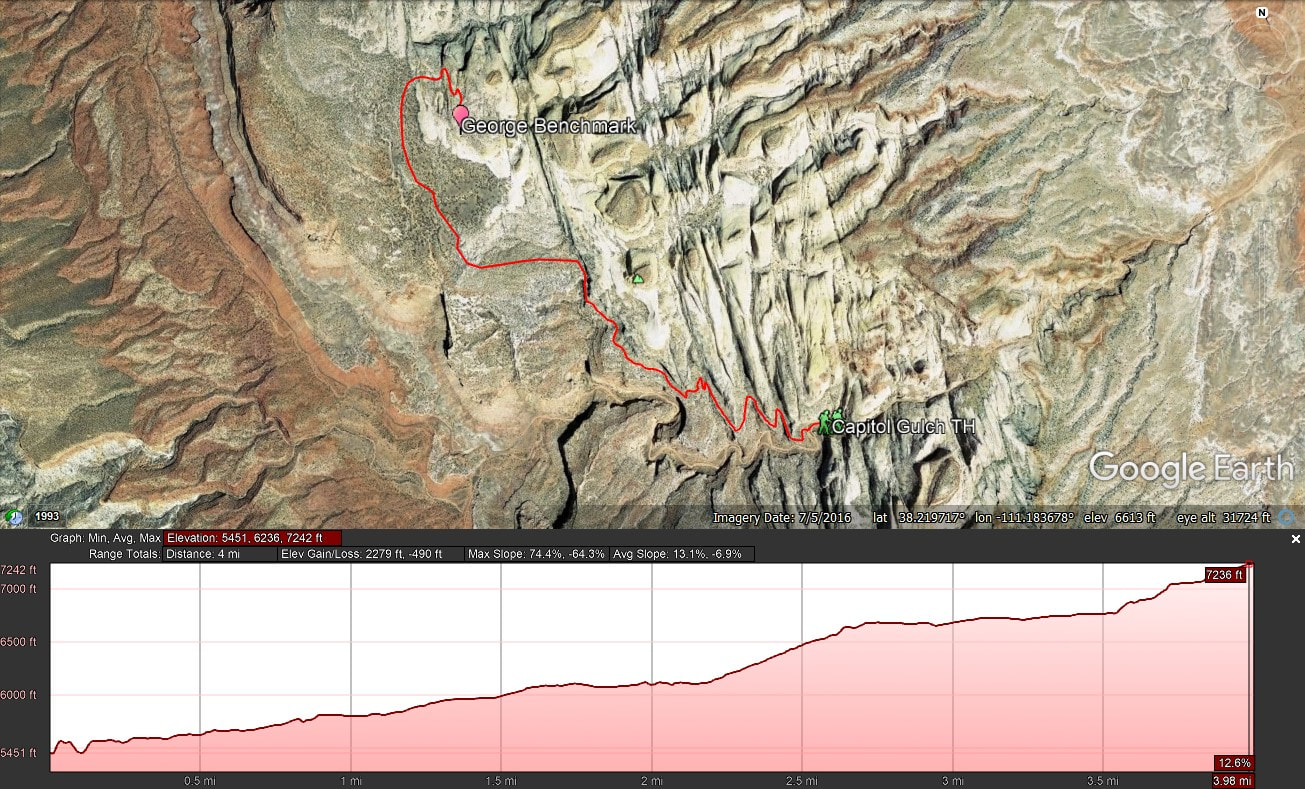 Map of the route up George Benchmark