Glacier Peak in the Montana Beartooth Mountains is the westernmost 12,000 foot peak and dominates the western margin of the range. This peak has fantastic technical routes on its north face, including the Beckey Couloir which cuts right to the summit through the face for over 2000 feet. The south face is relatively gentle and allows for an easy ascent from the Aero Lakes. The traverse to Mount Villard can also offer some moderate climbing. Views in all directions are stunning and the Cathedral Spires will stare you right in the face to the southeast.

There are many peaks named Glacier Peak around the world it almost feels like it may be the most common peak name, up there with Grizzly Peak and Bald Mountain. Naturally, it is unknown why this peak was given the name "Glacier Peak" but it most likely has to do with some kind of glacier carving work. Since the north face is so dramatic it may be the reason. Imagine glaciers completely filling all the valleys you see in the Beartooths all the way to the elevation of the current summit plateaus of all the peaks. That's ice coverage exceeding 2000 feet think in many places! Today, the Hidden Glacier flanks the base of the north face and it's aptly named as it really is hard to see.

The standard way to approach Glacier Peak is from the south where an ascent of the Class 2 south slopes can be made. Use the Aero Lakes trailhead to access the area.

Lower Trailhead
From the tiny town of Cooke City, six miles from the northeast entrance to Yellowstone National Park, head east on US Highway 212 for 1.6 miles to the Lulu Pass Road. Turn left on this good dirt road and measure from this point. Go 1.1 miles to a 3 way fork and continue on the middle fork. Stay right at 1.8 miles and reach the signed Goose Lake junction after 2.4 miles. Do not continue straight towards Goose Lake as this quickly becomes a high clearance 4WD road but instead park off the road at this large intersection. If you have a 4WD vehicle or a tough passenger car with good clearance you can continue to the trailhead by taking a very sharp right turn on a small side road. Follow this rutted road for 0.3 miles to its end at 8,850 feet at an old mining cabin and a slough of mining ruins. You can camp here but the grizzly bears have been known to be a problem in this area.

Upper Trailhead
If you want to shorten your approach a little you can continue straight at the large Goose Lake intersection, passing by Mud and Round Lakes to a point 0.3 mile past Round Lake at an elevation of 9,420 feet. From here a switchbacking trail heads east downhill for 1 mile and meets the main Aero Lakes trail just to the north of Lady of the Lake at 9,150 feet. From the lower trailhead, begin by crossing the creek just to the right of the old cabin (which was loaded with books, a stove, cots and all the newspapers you can dream of). Follow the trail to the northeast for 1.5 miles to the south end of Lady of the Lake to a signed junction and turn left. Continue on the nice trail around the west side of the lake for another mile to a second junction where the trail that descends from the upper trailhead meets the main trail. Stay straight and continue 1.8 miles to a third junction. Cross Star Creek enroute and take a right heading up the trail to Aero Lakes. Reach Lower Aero Lake at 10,000 feet after another 1.1 miles, a total of 4.4 miles from the lower trailhead. Fantastic camping can be found here. You can also continue northeast around Lower Aero Lake to the upper lake with even better camping and view with more solitude.

South Slopes - Class 2
From Upper Aero Lake, head around the north shores of both lakes and continue north on talus or snow depending on the season aiming for the gentle south slopes and hike up directly to the summit, about 2,200 feet of elevation gain over the course of a couple miles. The views from the summit are breathtaking and don't forget to peer over the north face while up there!

North Face "Beckey Couloir" - Class 5.7, Steep Snow/Ice
Not only is this route very difficult with very steep snow and ice nearing 60 degrees in steepness with up to 5 pitches of 5th class rock climbing, it is difficult to access. It was first climbed by Fred Beckey in the summer of 1965. Likely the best place to approach this face is from Goose Lake since the wilderness boundary takes a large jog to the north allowing for vehicular travel to get closer to the highest peaks. A nice trail heads northeast for 3 miles from the wilderness boundary just south of Goose Lake to the 10,650 foot saddle between Iceberg Peak and Sawtooth Mountain, where the infamous Grasshopper Glacier flanks the north side of this saddle. If you look closely you might see some grasshoppers in the ice. You can descend the Grasshopper Glacier and traverse around the upper end of the West Rosebud Creek drainage and round the west face of Glacier Peak at the 9,500-10,000 foot level and reach the base of the Beckey Couloir at 10,000 feet, 2 miles from the saddle.

You can also approach the north face by continuing straight on the trail along Zimmer Creek for 1.4 miles to Zimmer Lake at 10,150 feet instead of heading to Aero Lakes. You can then head north on gentle slopes to the 10,800 foot saddle between Iceberg Peak and Mount Wilse and descend the Grasshopper Glacier meeting up with the route described above in the upper West Rosebud Creek drainage.

Another approach option takes you to the West Rosebud Trailhead and has you hike the long trail to the west end of Mystic Lake and round around the north side of Island Lake. However large amounts of bushwhacking are required past this point as you must ascend along West Rosebud Creek all the way to treeline, 2,500 feet above Island Lake where the forest is pretty thick.

Glacier/Villard Traverse - Class 3
This traverse is fairly straightforward. There is an unranked 12er called Hidden Lake Peak you must ascent over en-route between Glacier and Villard. There are a few short class 3 steps but nothing too technical. The rocks along this ridge are large and loose so exercise caution.

This is a route I accidentely did with my close friend Elaine. It turned into a wild outing with an unplanned bivy. The words below describe the events and some beta from the 2018 AAJ if anyone else is adventurous enough to repeat.

Intending to have a nice, somewhat leisurely outing to complete my goal of climbing all the 12,000’ peaks in Montana, Elaine Kennedy and I set out to climb the prominent Beckey Couloir on the north face of Glacier Peak (12,340’) on August 17. [Editor’s note: Fred Beckey and Dave Beckstead made the first ascent of the face via the prominent central couloir and several rock pitches on the headwall. see AAJ 1965) What ensued was a bit more than we bargained for, all stemming from what could be the biggest navigation blunder in my menial climbing career.

The 11.5-mile approach originating just beyond Cooke City took us past Goose Lake, over Iceberg Pass and back down, and around the west face of Glacier Peak across a heinous rock glacier. The talus hopping in the Beartooths, as usual, didn’t disappoint. We bivied below the west face at the base of the rock glacier, and finished the approach to the base early the next morning.

Entering the small basin below the north face, I spotted an obvious couloir, assumed it was the Beckey, and we began climbing without giving it second thought. Booting up the perfect 55–60° degree snow, we made excellent time. However, as the couloir began to bend to the right after about 600’, the snow ended and we hit rock sooner than expected.

From here we trended up and left. Fourth-class rubble turned into 5.7 face, followed by two pitches in a dirty, wet chimney, then out left onto some runout 5.6 slab, followed by two more pitches of 5.7/5.8. I hadn’t brought my rock shoes to save weight, and I need to work on climbing in my bulky size 16 boots. At this point, we were pretty sure we were not on the Beckey.

We found ourselves in a somewhat improbable location where the only climbable way was a scary 5.8 rightward traverse with little pro. The following 70 meters of rubble-strewn 5.4 went quickly, but the crux was still above us.

Elaine took the lead and attempted to attain the top of a rib above and left of us. Everything left looked hard, so we continued up the easy ramp as far as possible, to where it curved into a dihedral. Unfortunately, multiple microwave-size blocks teetered on the brink of freefall. Elaine took a wicked fall here and was lucky to be unscathed—she's a tough girl. I climbed to where she fell and built an anchor, and after some TLC, we were both above the looseness without knocking anything down.

I searched for a way up the final 40 feet to easier ground and rounded a large boulder with some serious air. Amazingly, I found a bomber 5.8 hand crack. With darkness nearing, we did one more long 5.4 pitch and found a place to bivy. That night was magical, as we lay on a knife-edge ridge under clear skies with dazzling meteors. Throughout the night, I recalled past trips to this mountain range for which I have an enduring fondness.

The morning sunrise behind Granite was the perfect energizer, and we finished the climb with one class 4 pitch up the rib to the summit plateau. Upon summiting, I realized definitively we did a route nowhere near the Beckey Couloir, as we were way off to the west. We were ecstatic with our accomplishment, though, and probably still a bit scared, and we had a lot to talk about during the 10-mile hike back down the south slopes and past Aero Lakes.

After returning to civilization, we did some research and determined we had initially started up the Catch-a-Fire Couloir, which eventually ends at a notch in the ridge and has been skied several times. No one we spoke to seemed to have any knowledge of any summer climbing routes in the vicinity of the couloir. We named the route Catch-a-Sunrise (2,000’, III/IV 5.9 PG-13). 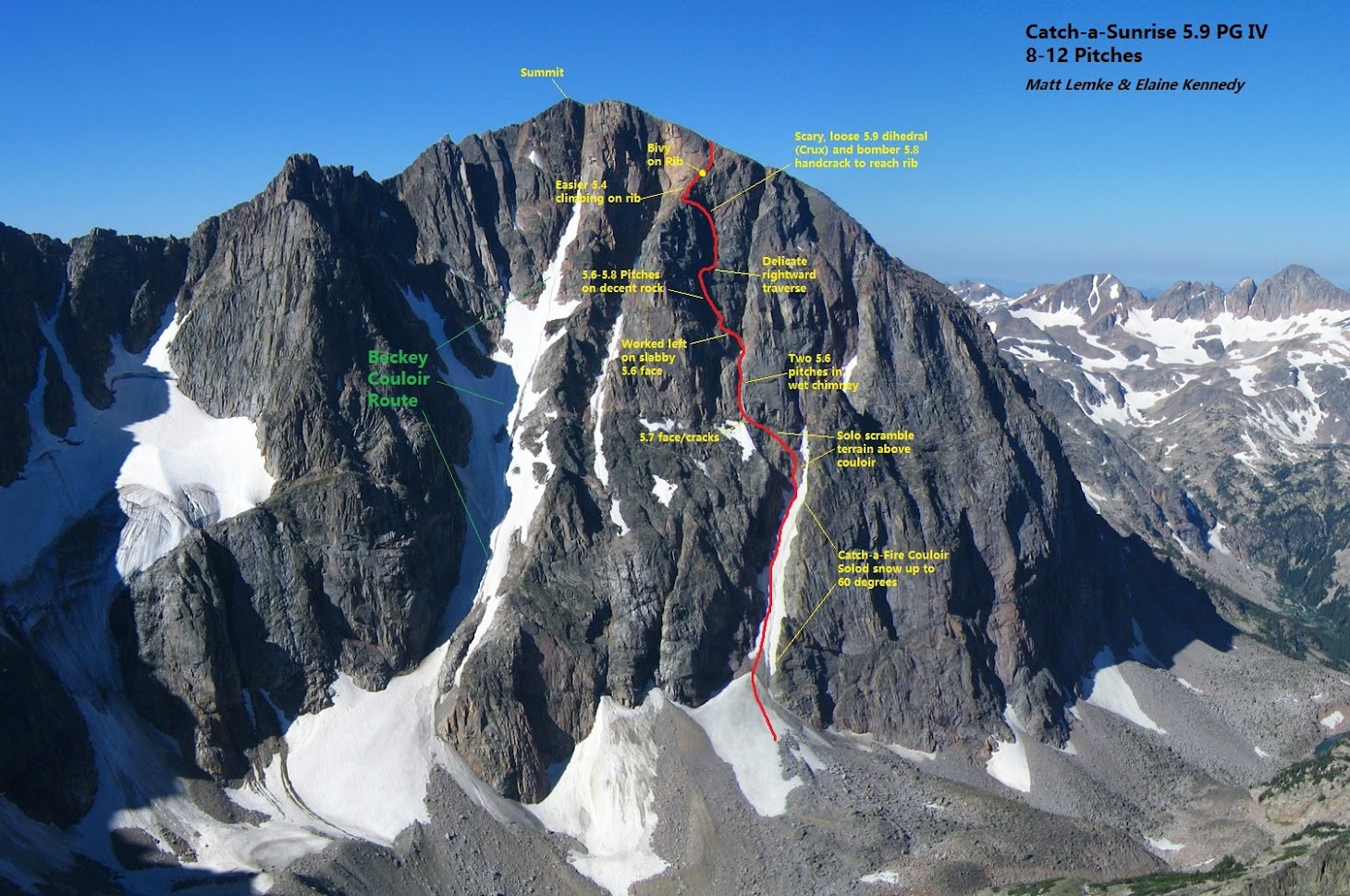 Below is a map showing the routes on Glacier Peak: The trailhead and first mile of the trail are within the National Forest however Aero Lakes and Glacier Peak lie within the Abasorka-Beartooth Wilderness. No motorized equipment is allowed. Please leave no trace.

Camping at Lower or Upper Aero Lake is all fantastic.