Josh, Elaine and I climbed Robinson Mountain right after our climb of Jack Mountain the day before, and due to the soreness from Jack, we opted to sleep in after our wonderful mexican food dinner and relax as long as we could the next morning. We didn't wake up until after 8 from our parking spot just outside Winthrop, and after stopping at the grocery store for more food, and packing up our packs (without crampons or other climbing gear thankfully), by around noon or so we started up the Robinson Creek Trail. It was very hot, and we took frequent stops in the shade. The rock spires we noticed on the flanks of Last Chance Point just across the creek drew our attention. It is a short 2.3 miles or so to the bridge crossing on Beauty Creek, where we easily found the boot path leading to the right, and steeply ascending the slopes on the left side of Beauty Creek. We decided to get to the base of the unnamed creek draining the small basin on the SE flank of the mountain, and camp there around 5,200 feet. It was only 3pm when we arrived there, but there was still enough snow cover to require us to dig a tent platform in the snow to set up the tent. We really enjoyed the leisurely afternoon napping and soaking in the sun. It was actually a very hot hike up to this point as the sun was beating down on us the whole way up the trail. We hit snow around 5,000 feet, and camped in it, however the east facing slopes leading up towards the basin above us were mostly dry up to 6,000 feet amazingly. Looking up at the spires on Last Chance Point It was actually a fairly cold night which was unexpected given how hot it was the day before, but since we were so close to two converging creeks the air was probably colder where we camped. Around 6or so in the morning we started hiking up the steep grassy slopes to the west and finally hit continuous snow at 6,000 feet elevation; much higher than we did on Jack Mountain! We put the snowshoes on around 6,200 feet when the terrain flattened out a bit in the basin with the small tarn. We weaved our way through the trees up the basin without any trouble on snowshoes (no sinking!) and made it to the tarn at 6,780 feet which was still entirely covered in snow. We didn't waste any time and quickly started up the steepest part of the route up the south facing slope up about 600 feet to the long SE ridge of Robinson. We climbed this snow slope in our snowshoes as well, with minimal sinking. Actually, this slope will likely completely melt out soon as the snow was only a few inches thick in places. At 7,400 feet we reached the ridge, and were able to ditch the snowshoes. The vast majority of the ridge was completely dry, with only a couple small snow patches to cross. The class 2-3 scrambling was fun and warm in the sun. We quickly made it to point 8,260 at the head of the small basin above the tarn, then had easy walking on mellow ground all the way to the crux, a 50 foot class 3 step shortly below the summit. This was not difficult at all and after 10 more minutes we were at the summit. My sense of humor was probably active since I utilized my perfect cell service to play Mrs. Robinson by Simon and Garfunkel on Youtube for us to all enjoy. It was fitting! We enjoyed the warm sun, crystal clear skies and commanding views for at least an hour on the summit. Many Pasayten Peaks were very visible, as well as Jack Mountain among hundreds of others. Our Descent was uneventful and we made it back to the van around 4pm or so. We had a nice and easy 2 day climb of Robinson and we are happy we decided to take the extra time! 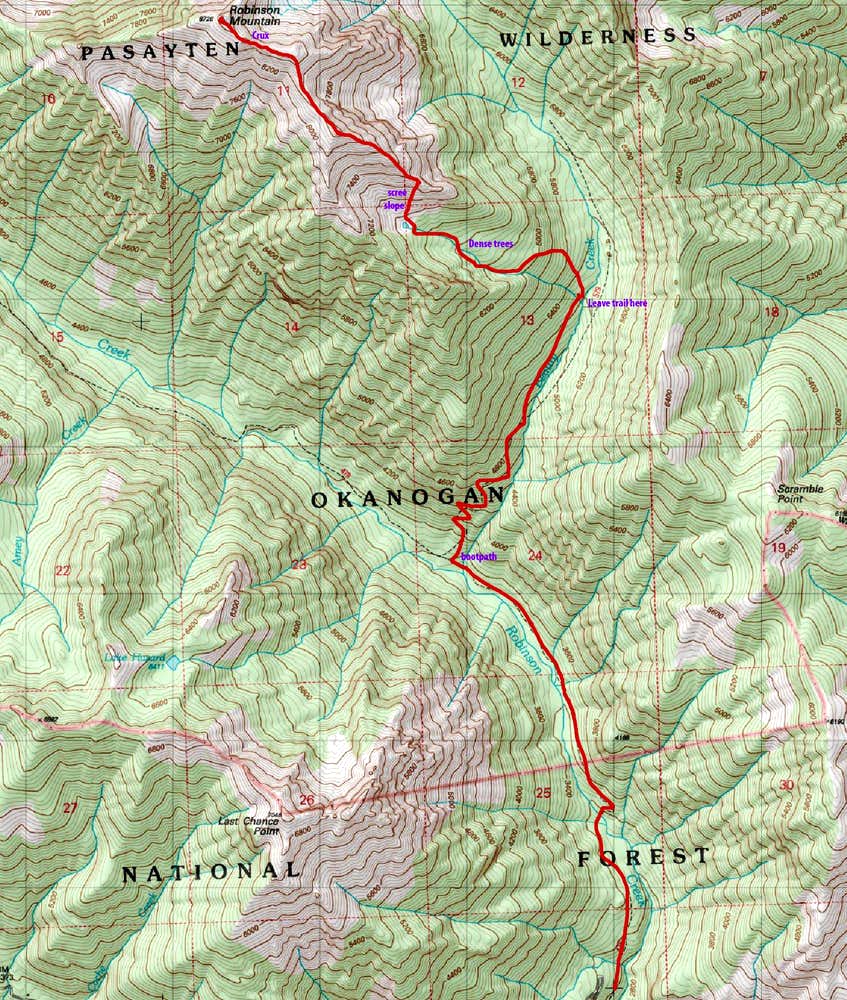