As the summer season was winding down in Patagonia for Elaine and I last year, we found ourselves slowly drifting northward. We rented a car for a handful of days for cheap in Puerto Veras, and drove up to Pucon where I had the idea to climb one of the volcanoes just west of Lanin (which I had climbed solo back in 2014 just after Villarrica erupted). We took a drive up a series of gravel roads east of Pucon until we ended up at a nice church camp where we parked the car and started walking up the nice trail. The view of the mountain from here was stunning, and the fresh snow above treeline reminded us the fall was very near down in Patagonia.

A great trail takes hikers all the way to treeline on the mountain, which we reached after just a couple hours of steady hiking. Three days of straight rain the previous days made all the underbrush wet, but the air was very clear and with the sun out, we had gorgeous conditions on the upper mountain. The whole way to the summit above treeline was a hike up the snow covered trail, however only 1-2 inches deep. We passed by a group of 4 also heading up who were taking a break. They were unsure if they wanted to continue, however I think seeing me powering up in shorts made them decide to continue, because just as we started down we ran into them at the crater rim just having reached it! Once on the summit, I finally got to see Lanin off the other side, and remembered back to that day. We found a nice sheltered rock to relax for awhile, and enjoyed the view, with clouds at times rolling in and out. It was a great late summer day on one of the Pucon volcanoes. Some day I'll poach my way up Villarrica and get all 3 of them, but my desire to ascend that one is a bit less due to the red tape the Chileans place on it (it's so popular so they implement a guiding requirement unless you can prove you have experience and gear).

After hiking down, we returned to Puerto Veras to return the rental car and boarded the night bus back to Santiago. This was a great way to end 2 months in Patagonia. View of the mountain from where we parked Nice church camp at the end of the road Elaine working her way up Lanin from the summit 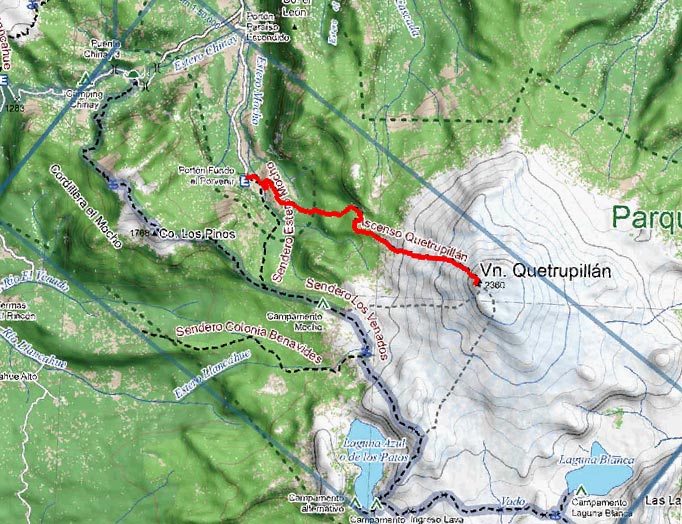