After meeting Elaine on a hike in the Kananaskis in February 2017, I quickly knew she was someone really special, and an amazing climber as well! We both shared a passion for mountains, climbing, hiking, and a general outdoor lifestyle. In addition to that, we both have aspirations for living minimally and the idea of getting a van was something we both had thought about, but hadn't ever taken the plunge and committed to it...until now!

We both cannot fathom seeing ourselves falling into the typical societal norms of working full time your entire life, getting a house and mortgage, settling down, and having kids. We do understand this is the dream for many people though and we highly respect that, it just isn't our dream. We still fully support ourselves and both have great jobs; myself in Geology and Elaine in Biology, however work is not the focus of our life. We believe there is much more in life that is awaiting discovery, and our goals include things like travelling around the world, teaming up on amazing climbing objectives both in North America and internationally, keeping our footprint minimal, and inspiring others to follow their dreams. We threw around ideas of which vans we thought were best, and did quite a bit of research, which prioritized finding a van that I could stand inside despite being 6' 9" tall!

Amazingly, we stumbled into the Ford Transit series, which was recommended to me by a friend. These vans were unfamiliar to me since the series was only introduced to North America in 2014, despite being popular in Europe for decades. Unfortunately this would make finding a cheaper used model more difficult, but their high top model was indeed high enough I could stand inside. The Sprinter and Promaster vans, which are the major competitors were not as tall, and after hearing more and more stories of Sprinter maintenance issues, we decided against them. So we began looking around for a Ford Transit with the highest and longest dimensions and I was surprised to find out they are very hard to find! Since we were not wanting to buy a new one, I only found a handful at a time for sale, often in places like Georgia or Texas....a long ways away.

By nothing short of pure chance, shortly after the 2017 solar eclipse, which we watched in the Wind River Mountains in Wyoming, I was wanting to sell the SUV I had (which I purchased in LA after my 1987 stationwagon was stolen). So I returned home to WA right after the eclipse and started shopping around for a trade in. Whether it was fate or not, the first dealership I went to happened to have a 2015 Ford Transit 350 sitting on the lot! Naturally I went to look at it and give it a test drive. I definitively determined that I was able to stand inside, and really loved it! Of course, as fate would have it, Elaine and I now have the perfect van and the conversion process has begun!

**2020 Update - While Elaine and I have since parted ways, she is doing very well up in the Yukon. I sold the campervan in May 2020 shortly after I finished building it to one of my best friends. He and his wife are using it as it was intended, and I couldn't be happier for them! 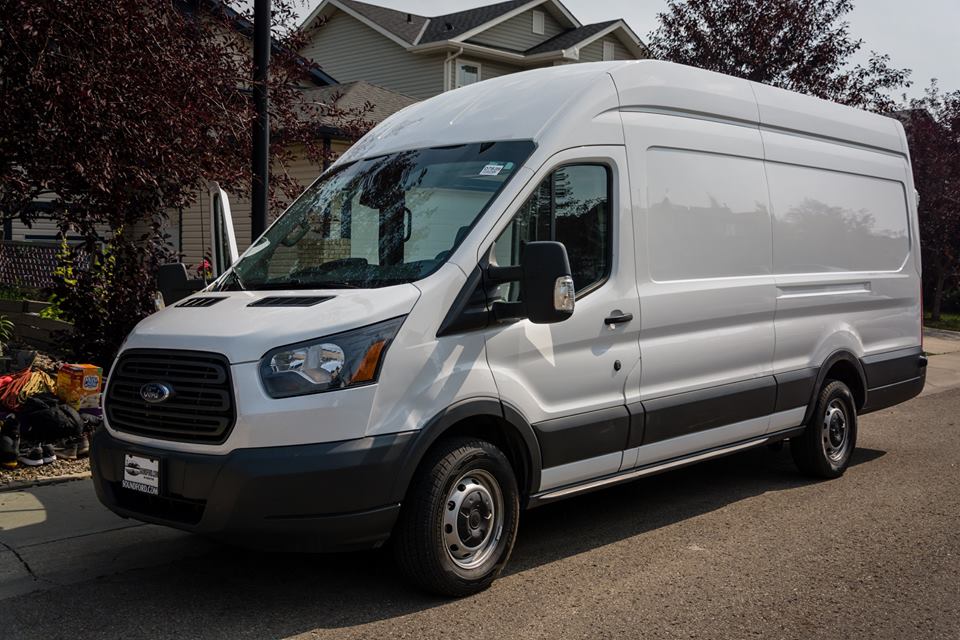 Our 2105 Ford Transit 350 cargo van has quite a bit of perks. We were very lucky to stumble across this one with only 36,000 miles on it. Outlined below are the features of our van.

Style: Cargo Van - We didn't want to have to deal with seats or an interior, so it made no sense to buy the passenger wagon style. Our van did come with the rear vinyl floor however, which was great to have as a template when we made our own floor. There are also windows on the sliding side door, and the rear doors, so it isn't a total creeper van haha!

Engine: 3.2L I5 Powerstroke Turbo Diesel! I have calculated with redundancy that this engine gets 23 MPG when highway driving at an average speed of 65-70 MPH on mostly flat terrain with light winds. Under similar conditions averaging 75-80 MPH, the fuel economy drops to about 19 MPG. Amazing for a vehicle of this size! Plus, diesel can often be cheaper than standard gasoline, especially in Canada.

Size: Extended Length (263.9 inch total van length) with High Roof (81.5 inch interior height). The wheel base is a standard 148 inches, which is common for many pickup trucks and other vans. This is nice because the rear wheels don't off-track much, however the back end will swing out more. I noticed this van actually off-tracks less than by GMC Savanna work van which is considerably smaller, but I have to keep close watch to the back corners when I make sharp turns.

Color: Oxford White - The white color will help keep the interior cooler on the long sunny days of summer.

Rear Axle: 3.73 Limited Slip Differential - This will help with traction control, and the 3.73 ratio provides more torque than the standard 3.31 ratio. I notice this when going up hills, the engine does not have to downshift as often unless it's a steep hill, which saves gas since the engine RPM is not increased.

Payload: 3,500 Pounds - I cannot imagine any way we would put that much weight in the van. To save as much on gas as possible, we are keeping a keen eye of the weight of everything we buy, and highly considering lighter products in all aspects of the conversion. 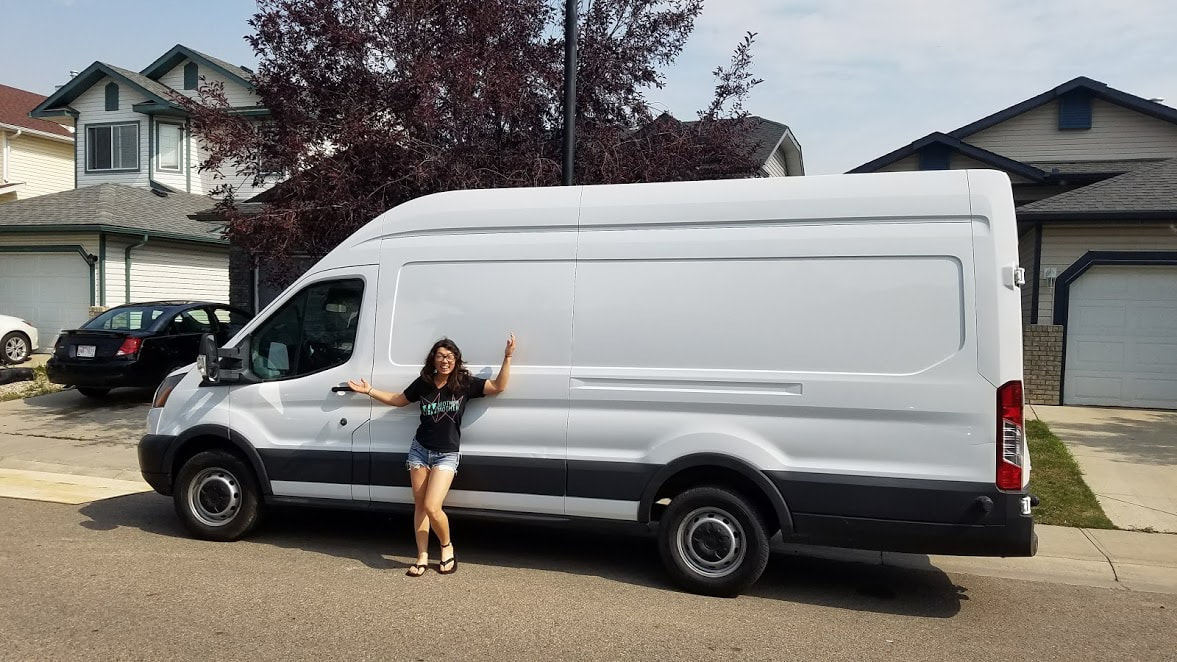 What will our van have?

Unlike others we have run across who only plan to live in their vans for a year or so, we envision this being a longer term home we can use either as a place to reside while working or in school, or take where ever we decide to adventure next! Therefore we will be working hard to make every detail of the conversion as awesome as possible. We have discussed the various things we would like in our van and decided on the items listed below:

- A folding bed allowing us the ability to walk through the entire van as desired. Some camper vans we have seen with a fixed bed taking up half the van does not appeal to us. Even if we leave the bed down for days at a time, we want the flexibility of opening up the back end.

- Climate control, good enough where we can live inside in the dead on the Canadian winter if needed. This will likely require quality insulation, heating system and airflow. We have already purchased Thinsulate, which we will use as our primary insulation, and it's awaiting installation. We don't plan to have an air conditioner (other than the one the van has when it's running), as we do not plan to be in very hot places during summer.

- A comfortable couch with backrest, coupled with a working/eating dining room table where we can sit and have a place to relax. With the swivel we will install on the passenger seat, this will also allow for enough places to sit when we have company.

- Plenty of efficient storage space for climbing and outdoor gear, including books, camera equipment, tools and other electronics.

- Full kitchen with range, conventional oven, refrigerator and counter top space. If we are living in here, we will need to cook many meals! - I ended up not installing a drop in range, and just kept the portable camp stove method. A refrigerator was installed though.

- At this point, we are only planning to install a hand pump water system with sink, however we will design to allow for a full water pressure system in the future - I ended up installing an electric pump and 15 gallon tank

- Fully independent regarding power supply, meaning we want to be 100% reliant on 12 volt power we receive from the solar panels. We plan to have a simple and efficient electrical system and minimize the electrical draw. We haven't yet determined whether we will utilize the battery currently in the van with a power inverter yet, however that is a possibility. - I did install a devide to utilize the alternator while driving to charge the house battery.

- Ability to eventually be able to shower - Never ended up adding

With the above things in mind, we began to envision the van right before our eyes! Given the limited 85 square foot space, there are only a handful of ways you can really lay everything out, but we still believe our van will be quite unique when its finally completed. A few things we are not planning to add, because we do not feel their costs are worth the investment or the space they take up include:

​- A toilet...the world is our bathroom and in cities/towns there is always an endless supply of places you can go to the bathroom - I ended up installing a composting toilet for emergency purposes.

- An awning...these are very expensive and honestly if it's really raining we are happy enough staying inside. If it is sunny we don't need shade.

- Air conditioning...this is just a ridiculous concept.
***Check out our Work Journal which describes in detail everything we have done so far, and outlines everything we purchased and the costs induced***